Across the Wasteland, there were rumors of random books and pages detailing flying machines, and one in particular was called the "Flying Fortress."
Among the marketplace debates, Jack Slade, the defacto criminal leader of the Nomadic Towns, asserted his own position that there were absolutely no such things as flying machines. He said the priests must have made a mistake in translating those stories, and that, in fact, "Flying" should have been translated to "Driving."
To further prove his point, Slade had his personal mechanics build a fully functional "Driving Fortress."
Now, Jack Slade and his gang rumble across the northern plains in his Driving Fortress, bristling with guns, strengthening his influence over the Nomadic Towns and defying the edicts of the Oak Street Church. 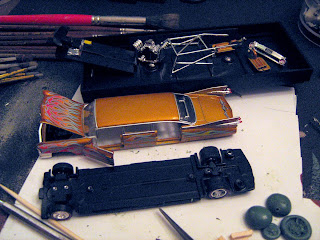 Here is my work in progress on Jack Slade's Driving Fortress. It is a 1/64 scale 1959 Cadillac limousine (Auto-stretch Rod by M2 Machines.) The first thing I did with it was to take it apart and discard the parts I wouldn't need; this gave me plenty of spare bits, but also opened up the interior so that I could build my two pintle mounts for the waist machine guns.

This beast will need some planning, because, to allow the machine guns to traverse and the doors to open and close, I need to paint the interior before reassembling the car. Once the car is reassembled (with waist and forward gun in place), I can begin construction on the exterior, including a couple pieces of armor as well as the tail gun. 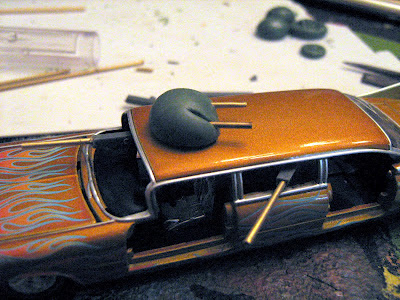 And yes, this car is inspired by the B-17 bomber. Since there's no room for a chin gun, I opted to represent the B-17's nose gun (in the bombardier's bubble) in the windshield of the car (though, the windshield will be replace with a metal plate.)

Once assembled, I plan on painting the whole thing as an aluminum shell. The trunk and fins will get a swath of color to help the chrome bumper contrast with the tail gun. Everything will get a regular coat of rust and dust. And, if I get ambitious enough, I might try to paint some pin-up art on the hood. Might.
Email ThisBlogThis!Share to TwitterShare to FacebookShare to Pinterest