Coming up next: A few more 42mm samurai 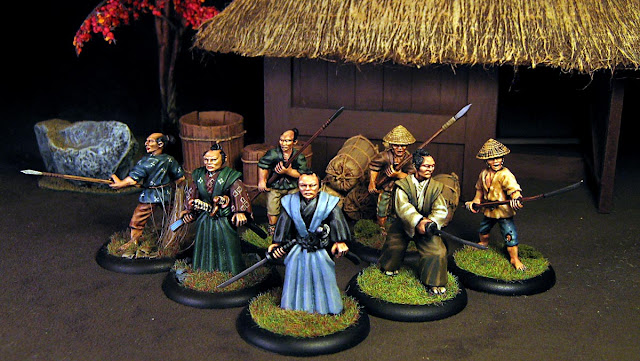 I dug out my 42mm samurai by Steve Barber and decided it was time for more. I'm ordering a few more peasants which will go to conversion city. I also picked up another of the newer unarmored samurais (advancing with katana) who I might convert into a ronin (file off the kataginu and add some wild hair maybe?)

Steve Barber doesn't have any new unarmored samurai just yet, but I'm sure there'll be some in the future. My plan is to eventually sell off my (42mm) armored samurai to fund a bunch of unarmored fighters, peasants and ninja as they become available; the armored samurai are still awesome, I just prefer a more Yojimbo-ish type of skirmish.

For those interested, I'm using the Red Sun, Black Moon ruleset by Two Hour Wargames. The rules are meant for fantasy gladiator matches, but work wonderfully for small (3 or 4 figures per side) skirmishes. And since these samurai and peasants have no armor, the skirmishes are a lot more of the one-and-done kind of bloody affairs (meaning you could probably add a couple peasants per side without adding too much more book-keeping.)

And for those whose ears perked when I mentioned I might be selling my armored samurai, If I sell them, they'll be sold as either one large set, or two smaller sets, and they sell for about the same price as I usually sell for ($200 to $300,probably on the higher side since there was a LOT of conversion work done on them.) But that won't be until much later -- unless someone suddenly offered me $1,000 for the bunch ... No? ... sure? ... Ok, just checking :)