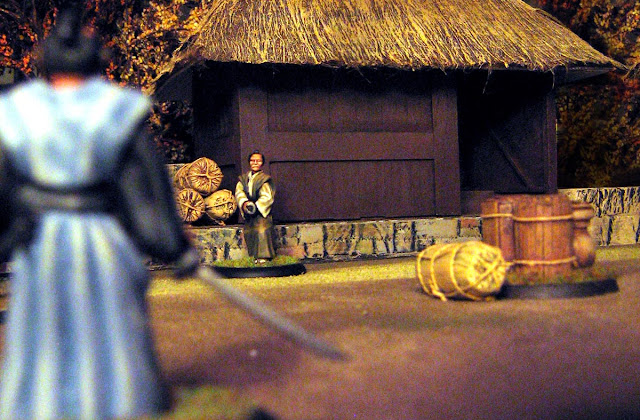 The two ronin, Hokawa and Tutaki, had once been friends, but when Tutaki took Hokawa's lucky omamori amulet as collateral over a gambling debt, Hokawa took offense. The omamori wasn't worth anything, but the two ronin knew that turning it over reflected poorly on Hokawa's reputation.

"You have my omamori, Tutaki, but if I seen you wearing it on the streets of this town, I will strike you down where you stand."

Tutaki did not heed the warning, and was seen the very next day walking around the market area displaying his new possession to friends and strangers alike. Hokawa's weakness in money matters was being aired out for all to see.
News of this reached Hokawa and he quickly made his way to the market with his katana unsheathed. The crowd saw the naked blade, and gave way, clearing the market. Tutaki saw the approaching Hokawa and drew his own blade, knowing there was no way out. The duel was on. 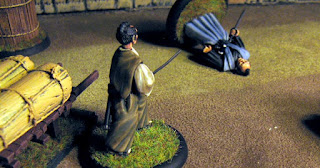 Tutaki was the stronger fighter with a slight edge in speed. He was also a hotheaded brawler, which made him stronger when he was able to follow up on his attacks.
Hokawa made up for his disadvantages by having the keener savvy. He also know how to position his body in defense so that if a blow did land, the damage would at least be minimized.

Hokawa attacked, lunging with his blade extended, but his wisdom gave way to rage and he over-extended, lost his balance and went straight to the ground past a dodging Tutaki who took a swipe with his own blade, gashing Hokawa's left arm almost to the bone. 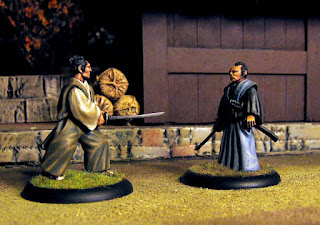 Hokawa was able to get to his feet quickly. He didn't rush into another attack this time. He caught his breath, refocused and waited for Tutaki to strike.

Tutaki obliged coming full-bore. Hokawa took his stance and chose where he would strike Tutaki. Both blades flashed in the sun. A hit. Both fighters stood still for just a moment.

Tutaki's face showed a resolute warrior, but his kimono betrayed a gaping wound as blood rushed from his chest. It was a deep cut - a killing stroke. Tutaki fell.
Hokawa had focused all his mind and body into one attack, and it had worked. Tutaki's body lie dead in the market. For him, the omamori brought no luck.

I used Two Hour Wargames' Red Sand Black Moon rules for this fight. I also tried (just once, at the end) the Aimed Attack rules, which worked to deadly effect. Since neither of the ronin were armored, any hit could be devastating; Hokawa lost all but one point of strength in his left arm on one hit (saved only because he had the "slippery" signature which softens damage), and Tutaki was killed from one hit to the chest. Since the hits do so much damage, the game went fast, lasting just two turns (and taking about 10 minutes.)

For the katana, I simply used the broadsword stats in Red Sand Black Moon. I've reskinned most of the weapons from the original game into Japanese weapons- there's no mechanical difference, it's just flavor to help me get into the game.

Last note: Some of you just might have recognized the events leading up to this fight. I set it up loosely based on the famous Wild Bill Hickock (Hokawa)-Dave Tutt (Tutaki) shootout in Springfield, Missouri, in 1865 (switching pistols for katana).
For those who don't know, during a poker game, Tutt took a pocketwatch belonging to Hickock as collateral for an unpaid debt. Hickock warned Tutt not to be seen wearing that watch in public. Tutt didn't abide and was seen the next day showing off the watch to folks in the town square. Hickock called Tutt out, and they drew down 75 yards from one another. Tutt missed, but Hickcock struck Tutt in the chest. Tutt stumbled for a few feet before falling dead.