This turned out nice for the amount of time I out into it. I had a piece of wood, some plastic, a few pieces of rubble and an old 65mm base with green stuff carved into flagstones sitting around the work table. It all went together in less than half an hour. After waiting an hour for the primer to dry, it took all of another half hour to paint it. Then 10 minutes to vegetate the base. Done! 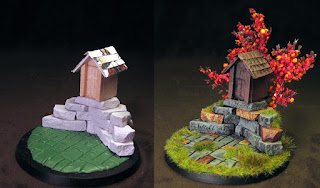 Ok, so it took longer than that if you count the time I took to carve the flagstones (I don't remember how long- if it was early in my green stuff career, then 45 minutes, if it was later, then 10 minutes.)

The rubble is from Gale Force Nine which has a few sizes of rubble to choose from (small - grit basically, medium and large -- what I used here.)

The small autumn tree was made using some floral stem scraps I saved over from when I first made my large trees. 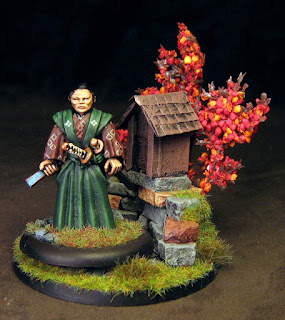 The tiles on the shrine's roof is just some cut-up strips of paper.

Update: Whoa. So as I was uploading these photos to this post, I came across a random file labelled "Shrine Base" last modified in 2009. It was the very base I used for this shrine!

I guess when I build something with a specific purpose, it'll get used as such whether I remember or not. (Oh, and 2009, I'm guessing the base took me about 15 minutes to sculpt.)
Email ThisBlogThis!Share to TwitterShare to FacebookShare to Pinterest