Samurai skirmish: A message to the rice farmers

The Asuka gang had moved into Kusatsu and sent agents to all of the farms to let the peasantry know who's in charge. Thinking little of the peasants, the Asuka only sent a few individuals to "talk" to the farmers.

Most peasants submitted, but the Takumi farm resisted; and they were quickly dealt with by the skilled swordsman Yoshida. The peasant Oboshi Takumi witnessed the massacre from the nearby wood and quicky ran to warn his neighbors of the approaching Asuka man. 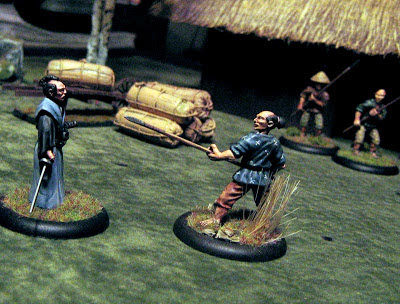 Oboshi found brothers Yata and Hayami. After hearing Oboshi's message, they all armed themselves with yari the two brothers had kept from the last war. Within minutes, Yoshida walked onto the farm, and was confronted by three peasants protecting their livelihood.

Yata brashly went forward to meet Yoshida one-on-one. He knew he would have to throw all his strength into one or two attacks if he was to defeat -- or at least survive -- this swordsman. Yoshida  moved to accept the challenge and sent a strong thrust with his katana directly for Yata's throat. But Yata was not just another rice farmer, he had once been an ashigaru; His skill was not great, but it was good enough to just parry Yoshida's thrust.

Emboldened, the farmer swung the yari trying to slash with the broad blade, but was deftly countered by a surprised Yoshida, who was frustrated that he could not easily dispatch the simple peasant. The Asuka man quickly adapted to this unexpected display of martial skill and threw himself into a strong attack. The flurry of sharp metal launched Yata backward with a slash to his right arm, which was little return for the amount of strength Yoshida had given the attack. 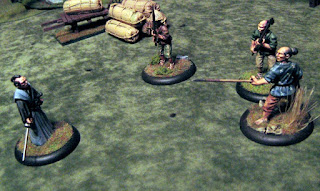 Hayami moved to support his wounded brother while Oboshi moved off to one side to bait Yoshida away from the brothers.

Yoshida stopped, realizing if he attacked either the brothers or Oboshi, he could be attacked from behind. He had used a lot of strength fighting Yata already, only slightly wounding the man in the arm. One-on-one, Yoshida was the stronger man, "But even a pack of dogs can bring down a bear," he thought.

"Ok, little dung beetles," Yoshida said to the peasants. "I'll leave you alone today. And tomorrow I'll bring my own brothers. So prepare yourselves to rise to Buddha." 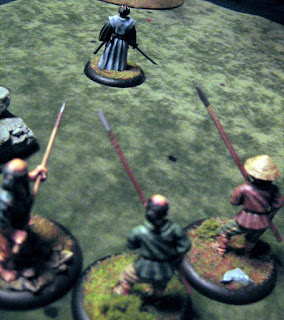 I played the peasants and let the NPF (non-player fighter) mechanics handle the ronin (though, I had him do an aimed attack at the beginning to try out the new rules.)
Since I didn't expect Yata to last too long going one-on-one with Yoshida, I threw half of his bonus dice into the first two attacks, which was just enough for the peasant to survive. On the second attack, Yoshida would also roll a LOT of bonus dice (luck of the NPF bonus die roll.) But even with all the bonus dice, Yoshida only just won the attack, causing only a slight wound to Yata's right arm.

After the farmers grouped closer together, I knew Yoshida would probably not survive against all three peasants at once. He could probably finish off Yata, but would be out of bonus dice before having to face the other peasants who had their full bonus die allotment, and who would also throw a lot of those dice into strong, single attacks.
So I figured that was a good spot to quit the game. There were no game mechanics making this decision for me, I simply made a solo roleplay assessment of the situation. Yoshida will go back to town, gather some more Asuka men and return the next day.

The Asuka will bring their swordsmen, and the farmers will gather a few more neighbors, and a small battle will probably ensue. I may have to dig out my Chain Reaction: Swordplay rules to play that battle.