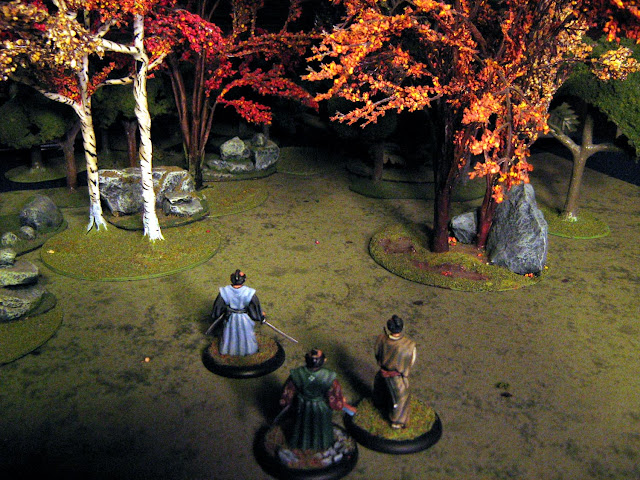 Yoshida returned to the farmland outside of town, this time with Onodera and Nakamura in tow, both of whom taunted the samurai for having been bested by farmers. Since they knew the farmers would be expecting them, the Akusa men took the old road through the forest from where they could use stealth before attacking.

Onodera pointed at a large empty bowl at the side of the path.
"Look- there are a few grains of rice left in that bowl, and some burnt offerings."
"Ha," smiled Nakamura. "Offerings and incense left for the trees in hopes the forest would protect the farmers. Poor Yosh, you were bested by superstitious peasants."

And that's when the ground thumped beneath their feet. And then again. And again. Slowly, in the distance, and each thump accompanied by rushing leaves and snapping branches.
The three samurai stopped and looked into the forest. The thumping began to speed up, becoming faster like a trotting horse. And then it emerged 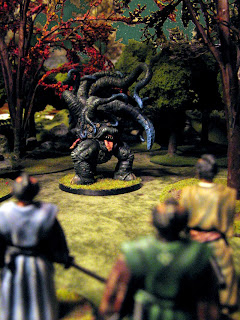 Onodera saw it first -- "It's a yokai!"
The samurai were terrified, but still had nerve enough to draw their katana. Onodera fought off his terror enough to attack the beast, a three-legged, three-mouthed, leathery mass of tentacles. The yokai was large but slow. Onodera was able to score a solid hit to one of the stump-like legs. But even with the cut, the wound seemed insignificant. Still, Onodera was no longer afraid, having seen that the beast could at least be wounded.

Nakamura moved in and also scored a hit -- another insignificant hit -- though it forced the yokai back toward the trees. Seeing the success of his fellow gang members, Yoshida took his best form and lunged at the yokai, but it was ready for the attack and smote Yoshida with one of its large tentacles. Yoshida's body tumbled through the trees. He was dead before he hit the ground.

Onodera came at the beast again. Even though he threw much of his strength into the attack, the yokai scored a lucky hit, shattering Onodera's right arm! He dropped his katana and was forced back. The wound was terrible, bleeding out through his torn kataginu. 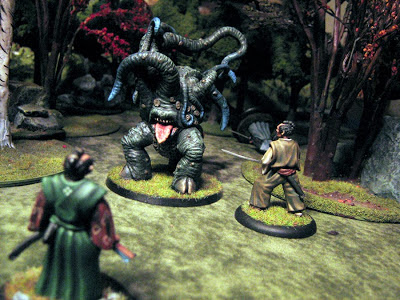 Nakamura renewed his attack but was thrown into the trees by the yokai, smashing one of his legs into a tree limb. Nakamura was just able to get to his feet, while the beast withdrew to catch its breath.

Onodera picked up his katana with his left hand, and the two samurai stared down the yokai. But the yokai seemed satisfied; it stood for a moment, then turned past Yoshida's body and lumbered back into the dense forest.

Onodera and Nakamura stood there, still in disbelief that they had fought and survived a fight with a large yokai. Survived, but battered; Onodera without the use of his right arm and Nakamura barely able to walk, and both of them without any reserves of strength left but to return to town.

"Tomorrow, Ono -- tomorrow we will gather all the men, give them nagae yari and hunt down that beast."
"And then," added Nakamura, "we will deal with the peasants, so overestimated by Yoshida, that idiot."

The the two samurai turned from the woods, and stopped in their tracks. Across the road, the two Asuka thugs came face-to-face with 20 grim-faced farmers, armed with yari, otsuchi and naginata. One of the peasants called out to his compatriots. "Our pet will get meat with his rice tonight!" 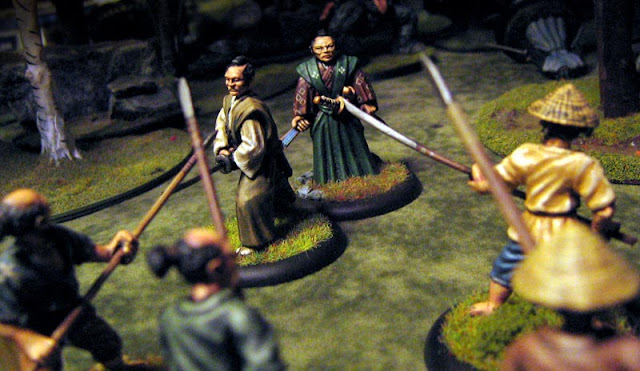