There was no announcement. Zato Ichi could smell the assassins before he heard them. There were three, and they surrounded the gamble-happy masseuse. The ninja at Ichi's front struck first. 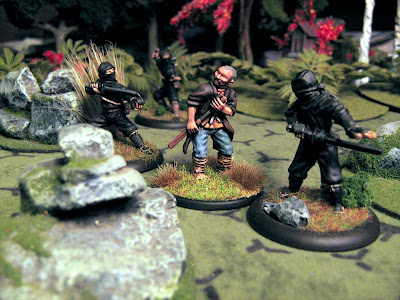 A flash of steel yielded no results. A second pass sent the ninja sprawling to the ground with a belly wound.

One of the ninja's comrades took up the attack, flanking Ichi in the tight space among the rocky terrain. The two exchanged slashes and strikes but Ichi managed to cut the ninja's arm forcing him away.

Ichi quickly turned back to the first ninja writhing on the ground and finished him off with another slash across the belly.

The last of the assassins attacked Ichi, but his clumsy attack netted only a small cut across one of Ichi's legs. Ichi stumbled back between two large boulders to prevent any more flank attacks. Again the second ninja attacked, and for his efforts received a wound nearly severing his right arm. The third ninja continued the attack but was also forced back with a light wound. 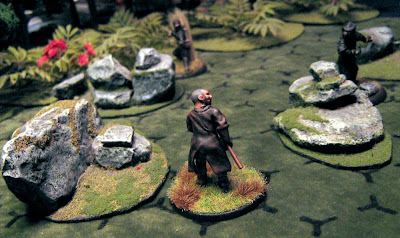 One after the other, Ichi fought and pushed back the two ninja. Finally, he caught a break and slipped a cut under the weakened parry of the ninja whose arm was hanging by a thread. The cut went deep into the ninja's belly, killing him instantly.

Ichi was able to step back to catch his breath. Then the masseuse and the ninja went straight back to work. Ichi started this fight off strong hoping to end it sooner than later, but when he crossed swords more than a few times with the two remaining ninja he knew he had to hold back if he wanted to survive. With one ninja remaining, he knew he could gamble and extend his attack. 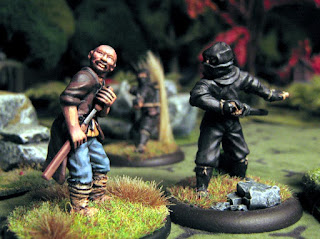 Mentally measuring the attacks and parries of his enemy, Ichi was able to determine the ninja's height. He mustered all his strength behind his cane sword, took his stance, and prepared to go for a head shot. The ninja came, and he and Ichi swung their shortswords. Ichi stood motionless as the ninja's head slid from his neck and dropped to the ground.

Ichi shook the blood from his blade, slipped it back into his cane scabbard and stumbled along the path toward town, where there was still gambling and sake to be had.