I found myself a couple hours of free time, so I finished up my '33 Ford hot rod, and started on a couple new cars- a '55 Corvette and '49 Mercury. 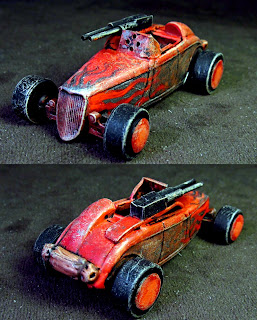 The Red Cricket was an impulse buy a couple weeks ago. The only conversions added were the twin .50s, the armored wheel covers, the body fairing behind the driver seat, and the blanket roll on the back. The Cricket was a Hot Wheels car (1933 Ford model which is often available from Hot Wheels.)

I don't have a background for this vehicle (being an impulse buy), so I think I'll just add him into the Circus faction. The Corvette and the new Mercury also don't have background's yet; I bought the Corvette just so I could add another vehicle in the Sports Car class to my collection. And the Mercury I bought just because it looks mean and belongs on the Machinas circuit.

The Corvette is from Hot Wheels' Boulevard line. I removed the windscreen, added triple .30s and some baggage. Among my Machinas models, baggage on the car usually indicates it's a car driven in the Known Wasteland. And no baggage usually means it's either a Church vehicle or a vehicle specifically tricked out for the Machinas circuit. 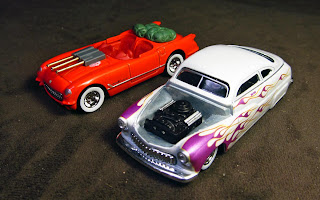 On the Mercury, I only had time to remove the hood (which was riveted on; this was one of M2 Machines cheaper cars.) Then I added an engine from a nice pile I've collected from some of my other cars. Those lovely large fenders have ample space for a pair of .50s I'll add. On the back, I think I will do a twin or triple-tube rocket launcher on one side and some baggage on the other side.
Email ThisBlogThis!Share to TwitterShare to FacebookShare to Pinterest