There are a few lone wolf racers in the Known Wasteland, among them Redding Rexicus, aka Red Rex. As are most of the lone wolves, Red is his own crew chief, mechanic and driver. 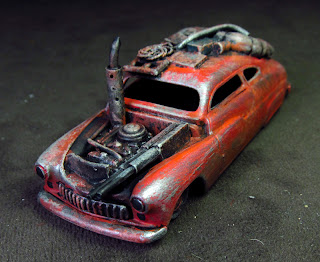 Though Red is skilled at everything he does, he has yet to enter the Machinas races in Seven Hills. The Machinas' high intensity races require a full crew working round the clock to repair the vehicles between each race. Since Red lives alone, he sually takes weeks off between each race to get his car back into shape. But it is also a testament to his driving skill that he often wins the few races he participates in, earning enough money to acquire the parts he needs to repair his priceless '49 Mercury (known in the wastes as the "Red Merc.")

This '49 Merc model is by M2 Machines. I added another exhaust stack (I just like the look a lot) out of the engine. Since the Red Merc has no support vehicles (or wagons or pack animals), it carries all of its own baggage as well a few spare parts, made with green stuff, brass and copper wire and a couple spare parts stripped from spare engines.

Saint Chevro's Corvette is an official Machinas racer belonging to the Yellow faction. The Yellows are one of the original racing factions (Red, Green and Blue being the others) founded by the Church. 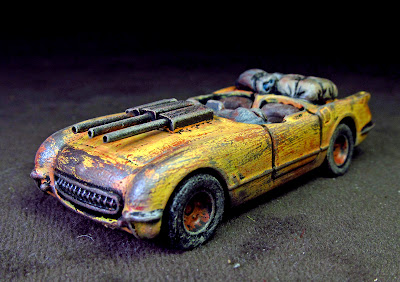 Though Saint Chevro's Corvette has raced in the Machinas a couple times, but since it has excellent maneuverability and acceleration, it is used mostly to represent the Yellows (and the Church) in the Mountain Races among the foothills of the Only Mountains.

This '55 Corvette is modeled with baggage showing the car as it would look traveling between races. It is armed with three .30 Brownings on the hood (in the Machinas rules, these guns could be counted as either Twin .50s or Fixed Forward Guns.)

I removed the windshield to flatten the car's profile out a touch (though the baggage quickly unstreamlined that idea). I also added a brass exhaust pipe on the right side of the car.

This car is from Hot Wheels' Boulevard line. One thing that I had a slight problem with was the rear wheels which were set too close to the quarterpanels resulting in the tires scraping against the panels. I removed the chassis from the body and set in a small amount of green stuff to raise the rear end just enough to clear the tires.
Email ThisBlogThis!Share to TwitterShare to FacebookShare to Pinterest