Zombicide: The end "was" near! 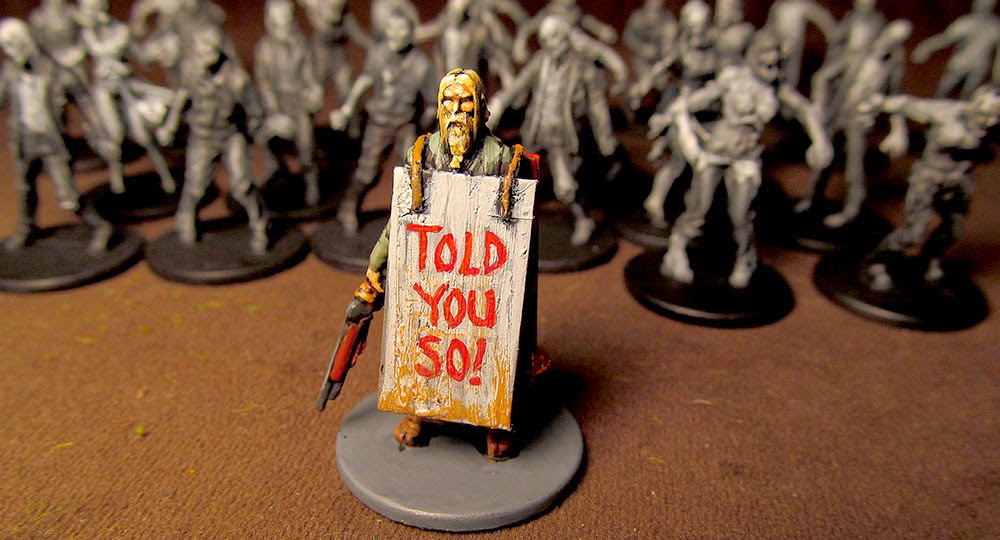 This figure actually started out as Padre Johnson from the Adrian Smith guest artist box. I wanted the box for the other figure (Bones,) but for the price, I was certainly going to find a use for that other figure, which I didn't much like.

It didn't take much to come up with the idea of the sandwich board. The conversion was also quit easy: I simply cut a couple rectangles out of plasticard, scored it with an awl, glued it on the body (the boards are held in place with green stuff,) and finally adding the straps which were made with twisted twine.

Both sides of the board have a layer of dust/grime at the bottom and the backside of the board is faded; it's meant  to represent a momento of Johnson's previous job. And the meaning of the phrase on the front? Usually, the cliche phrase on a crazy guy's sandwich board is "The end is near!" Well, the zombie apocalypse came. Thus, "(I) told you so."

So, instead of almost becoming a throw away figure, Johnson (I've dropped the "Padre") has been added to the ranks of my favorites figures (shown below.) These are my favorites based on look alone -- I haven't played enough to know which of these figures has the best skills or combinations or what not -- I'm an artist, I like something that looks cool. Bones, the other figure in this box set, I think will also get added to my "favorites" selections.