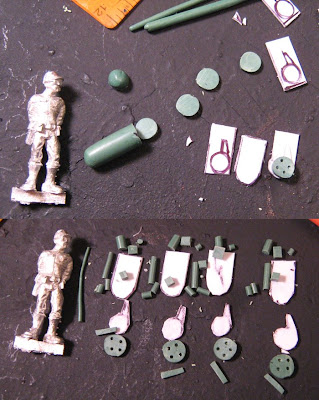 Greenstuff is proving to be a useful ally in this miniature endeavor. I rolled a small rod of greenstuff up with the intention of cutting disks from it to form the particle accelerators. I also figured out I can roll it to about 1/32 of an inch, and at that size, it is flexible and sturdy enough to model as cable/wire. I'll try to roll some and flatten it a bit to represent the belt of wires going from the accelerator to the generator (or was that the gun? I have to go look again.)
After I cut the disks from the rod of greenstuff, I had plenty left over. With an exacto knife, I cut small blocks and cylinders (from smaller rods) of greenstuff to represent the other features of the proton packs.
The packs, at least at the accelerator, may be a bit thick, but I think the minor bug in proportion will be ok at this scale; these packs are SMALL!
So most of the parts are gathered. I think I'll start putting it all together Friday evening. Now to find some micro-tweezers :)
Email ThisBlogThis!Share to TwitterShare to FacebookShare to Pinterest