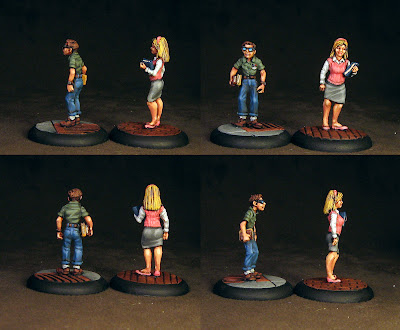 A babe and a nerd. These two figures are part of a three-figure blister, 50090 Townsfolk: Jock, Chick, Nerd from Reaper's Chronoscope line. The "Jock" figure is the one I am thinking of converting to hold a video camera.  Otherwise, all of the figures I had planned to paint for my set of Ghostbusters are all done! Now, I can go try out my ghostbusting variant of Tusk.

I thoroughly enjoyed doing the ghostbusters and paranormal investigators, there was plenty of opportunity for conversion, building and sculpting. These were also among my first modern (non sci-fi) figures I've ever painted. Ok, I probably shouldn't say this, but I was looking at my Waiteri tribe (54mm) and thinking, "Hmmm, I could convert some 54mm ghostbusters?"  The problem is, I know I could. It's just a thought. JUST a thought. There's still a mammoth to finish sculpting.

I guess I could still do some terrain for this collection. If I did any terrain, I would simply do a modular suburban home interior (a McMansion, so that my figures would have some space to move around.) I've certainly been looking at 28mm furniture and accessories. Most of it is a bit pricey, though. If I got any, I'd get enough for a mad scientist's lab. The rest I think I could make myself.

With the conclusion of this collection, it's time to look around and see what small collection I'd like to do next. Until then, I do have a few random figures sitting around, some Reaper fantasy figures and want not. Maybe I should go back and sculpt some more? I DO have a 54mm Female Rocketeer figure I was working on. Hmm....

Update: Oh yeah, I'm not done. I still have another mummy and a couple zombies to paint!
Email ThisBlogThis!Share to TwitterShare to FacebookShare to Pinterest