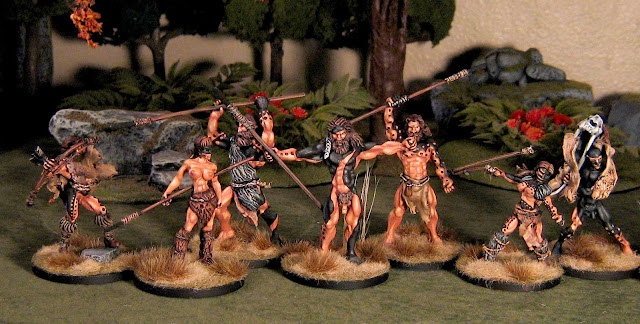 I was just looking through my Waiteri tribe to get inspired and ready for my 54mm post-apoc figures for Qwik (here's a pic for some of the newcomers here who haven't had time to explore my blog yet). This new project won't be too much different from these cavemen, though, I'll be adding more modern elements.

It will be a bit of a challenge since I haven't sculpted many modern things before. But since these characters are living in simpler times, I won't need too many modern extras. This will make the project a good transition for me into learning some new sculpting techniques. I've already learned that one can cut up old toothpaste tubes to use as belts and straps (thanks, Dave!) I've got two or three belt/strap techniques I'm going to try (among techniques for other elements.) I also may try to shape some armor over some Sculpey jigs, and cut and shape some halfway cured green stuff (that will be a big experiment for me.)

The weapons won't be too difficult since they'll be mostly melee (and I've hammered out my own before). I have a couple old weapon bits sitting here an there to speed things along. I also want to try my hand at a scratchbuilt chainsaw.
Armor should also not pose TOO much of a problem. I've done some before, but I don't remember exactly how I did it. It sort of happened by luck. I got a pretty decent Blood Bowl team out of some scratchbuilt armor (in the pic below, I added new armor to the guy on the far left and the fellow second from right.) If I do armor like some of that illustrated by Brom, I can just flatten out a few circles directly onto skin. I may try a "Brom"-ish team and a "Road Warrior"-ish team. Though, really, I won't know what the teams will look like until I start slinging some green stuff.

Also, to differentiate the new figures from my Waiteri tribe, they may sport the same style of warpaint, but one team will have blue (I know, cliche), and the other will have red.

Honestly, I could just use the Waiteri figures I already have to play the game, but I can't resist making some prehistoric looking characters wearing gas masks, sporting mohawks and swinging chainsaws.

That, and I am happiest when I'm at the table creating.

By the way, I've mentioned that Bronze Age Miniatures sells 54mm generic figures, but if large scale isn't your thing, they also have 32mm generics (including skeletons!) They also sell finished figures through different genres if converting/sculpting just isn't your thing. Go have a visit!
(And don't let the lack of a shopping cart scare you away. Dave is real easy to work with in getting your order placed and paid for.)
Email ThisBlogThis!Share to TwitterShare to FacebookShare to Pinterest