Here's my starting Iotacorp Rockets team. Still a couple figures to come next year (alternate poses as well as a keeper.) 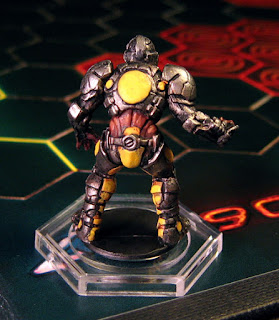 It's been a while since I've done any kind of "army" painting, that is, painting any number of figures  with the same uniform scheme (even if there are a few variations here.)

Here's also a reverse view showing the yet-to-be-finished number plate (or i could just give them all happy faces.) You can also see the area of the torso I've painted as leather. I wanted a touch of old school with these futuristic players.

I'm going to move on to the orcs this weekend. As far as I know, the main pieces of armor will be rusted through and through. The plan is to then roughly paint a color scheme on top of the rust. This will match the tentative background for the team, who will be a bunch of scrap metal smugglers, who've had their armor fashioned using their favorite pieces of found metal which was then spraay- or brush-painted over by the orcs themselves. I think I'll call them Skrag's Scrappers.

I also have another human team. I have no idea what scheme to give them yet.
Email ThisBlogThis!Share to TwitterShare to FacebookShare to Pinterest