Machinas: 57 Custom Lancer; Maybe moving on to other projects? 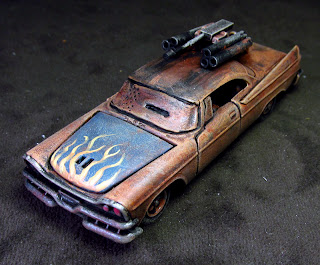 After doing a few Wasteland cars, I wanted to do a simple racer. I liked the all-rust look of my Runnin' Gunners faction, so I did this car up similarly (without the Indian markings.)

After painting was done the car still needed some kind of adornment, so I did up the hood with a simple flame job.

The rocket tubes are plastic and the gun my normal brass rod and plastic construction. It's all mounted on a 28mm scale Maxim machinegun mount.

I still have a couple cars on the table to finish, but after they are done, I may move on to other projects for a little while. Mostly, I want to get back and finish my orc Dreadball team. I'm also still waiting for a bunch of Reaper's Bones figures I'll be painting for a friend of mine.
Of course, all of this will be a slow process with my crap work schedule.

Another idea for a small project: I saw a 1/32 scale diecast '56(?) Pickup at Walmart. I think it might be fun to do up a Machinas vehicle that would fit closely with my 54mm post-apoc figures. I think I'd also convert one of Bronze Age Miniatures' generic figures into a Brother Pilot standing next to his vehicle awaiting the race. I'm sticking with 1/64 cars for playing Machinas, so this pickup would just be some nice flavor terrain for my apocalators.

Anyway, I'm not done with the Machinas vehicles, I'm just done with the current batch (almost- still two to go :)
Email ThisBlogThis!Share to TwitterShare to FacebookShare to Pinterest