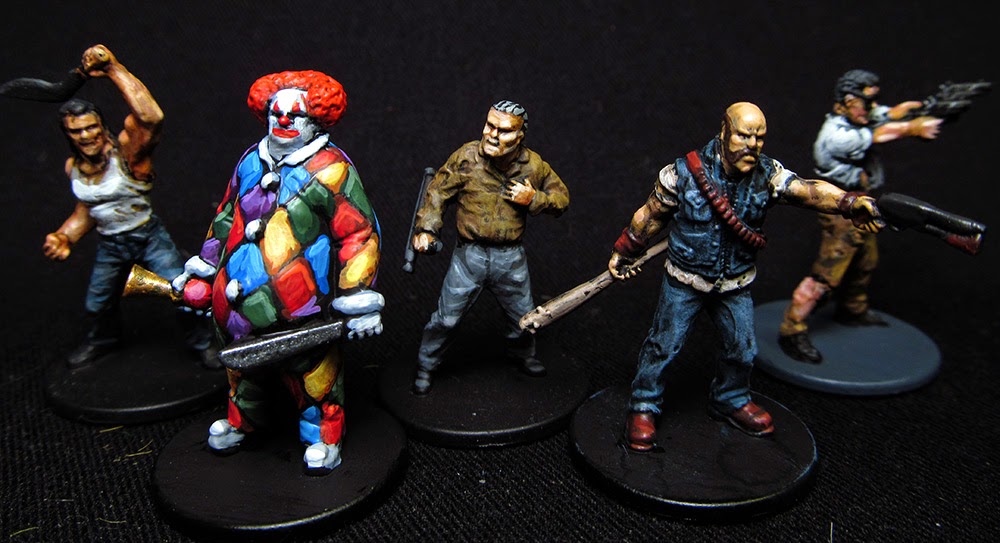 Actually, three of these figures are zombivors, but I've painted them as survivors. This way, I can use them in other zombie/post-apocalyptic games.

I also picked up the Kevin Walker guest artist box: Uncle Honk and Mitch. Mitch was easy; I drybrushed three layers of Foundry Storm Blue for the denim. I used an old, small brush to carefully drybrush the base layer of flesh, followed with simple applications of highlights. It's been a while since I've painted some figures (more than a month is a long time for me,) so I was entirely in my groove, but this is a start.

I think I had a good idea with Uncle Honk with those harlequin diamonds, but they went on a little thick. There was so many opening and closing of paint jars (three shades for five different colors), that I rushed through his painting. The diamonds are actually very easy to do, they just require you to use a little patience and slow down. (I still think he looks great from a distance, from which he'll be viewed anyway, so I'm going to leave him as is.) Really, all of these were rushed, but these aren't my favorite survivors; I just wanted to get some color on'em.

I have three or four more zombivors who'll be getting the extra-survivors treatment, and then ALL of my Zombicide figures will be painted! And then I'll have to sit around waiting for Season 3.
Email ThisBlogThis!Share to TwitterShare to FacebookShare to Pinterest