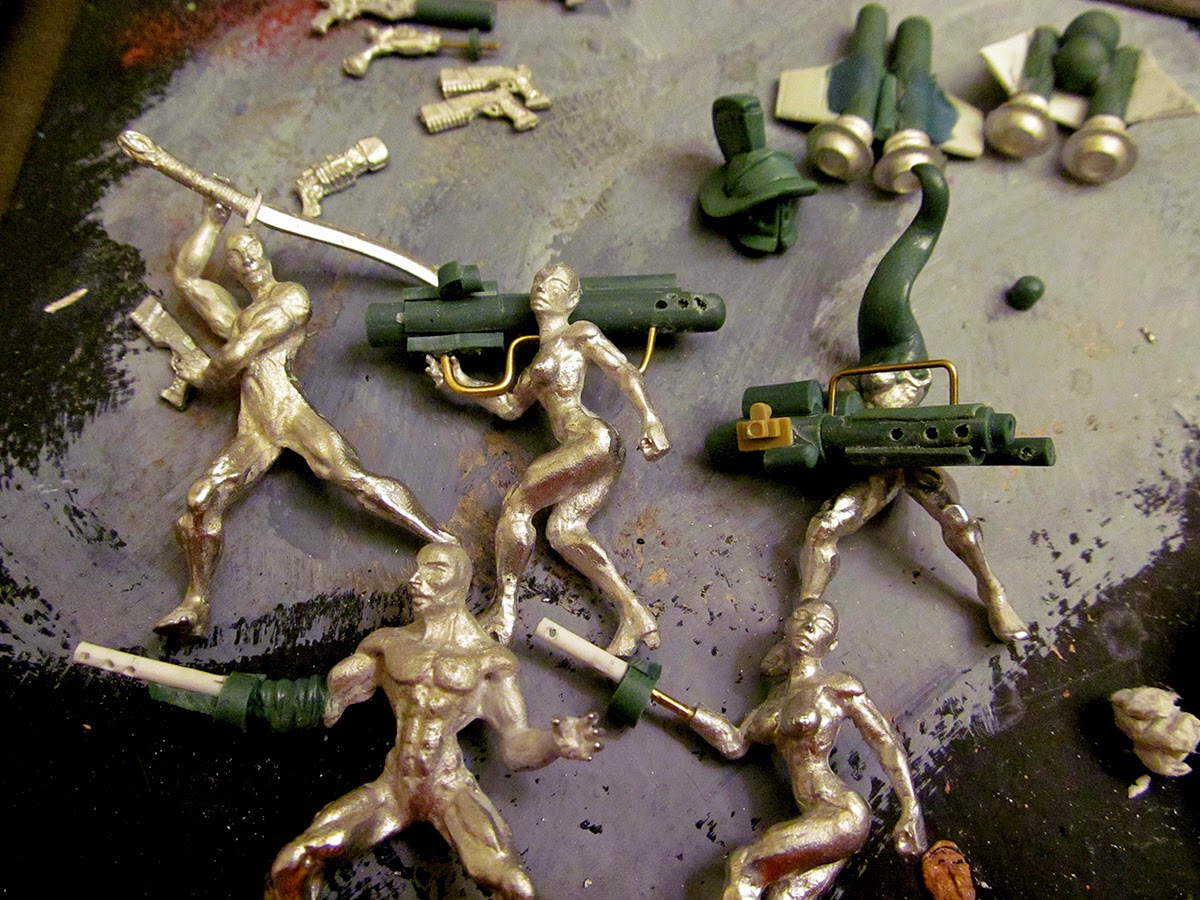 This is my first official Rogue Planet post. I've looked over the rules to get some ideas, and got a good start on things.

One thing about the rules is that they are generic, allowing players to use the mechanics of the game to create their own narratives. For example, a unit (unit can be a group or an individual) could have the attribute "Flyer." But how do they fly? This is up to you; you can, for example, say the unit has wings, or maybe anti-grav boots or (in my case) jet packs.

You can also combine the listed weapons in the game to create new weapons. An example Brent Spivey uses in his rules are combining an axe with a chained blade upgrade to create a chain-axe (chain as in chainsaw, for those not familiar with Warhammer 40K weapons.)
Melee weapons can have power upgrades. These upgrades can be explained as technological or magical as chosen by the player. (Tech or magic doesn't change the rules, only the setting or theme the player is trying to create for himself.)

One of the weapons -- carbines -- seem to be the main battle assault weapon. I've chosen to represent carbines as a weapon held using sort of a glove or gauntlet making the weapons look like extensions of the figures' arms. You can see it in varying stages on the two figures at the bottom of the photo. I'll probably add armor all the way up the arm -- a manica, using gladiator terms. About a third of the new figures will be fitted out this way, to represent my line troops (though, one of these is slated to get a jet pack).

The figures along the top of the photo, from left, are a sword and pistol warrior (what better to represent both sci fi and fantasy), a heavy launcher (missile launchers -- I think?), and -- my favorite -- a machine gun. My machine gun depicts three automatic weapons combined to make a bastard, triple-barrel machine gun. I call it the "Big'un."

I have a figure among my post-apoc gladiators inspired by Lovecraft's Nyarlathotep. I thought this would be a good chance to make a couple more figures converted to his race, hence, the tentacly looking head on the figure holding the Big'un. I'll call her Nyarla, after her dear elder dad.

And yes, that's a gladiator helmet; because it's sci-fantasy, that's why.
Email ThisBlogThis!Share to TwitterShare to FacebookShare to Pinterest