So Bryon's friend Andy visited last week, and he brought his Tyranid army among a few other GW odds and ends to paint. I saw that he had some Space Marines, and I asked if he had any beaky marines I could paint -- and he did!

I first got into Warhammer 40K in 1988 (The Rogue Trader days.) My first army was Imperial Guard, but I had a platoon of Space Marines, too. In 1989 or 90, I traded my 40K stuff for my fantasy Empire army (which I still have and has been posted to this blog before.)

Games Workshop's business practices pushed me away in the late 1990s. I've been repainting off-and-on my Empire figures, but I hadn't touched a Space Marine since 1990, until Andy let me paint his. Well, that was fun, I painted a couple up, and they went fast, but the sculpts were crisp and the lines still familiar 25 years and a few incarnations later. 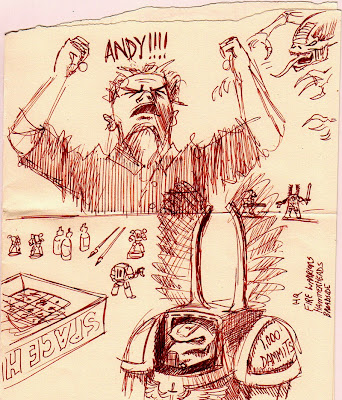 Now, I didn't go out and buy myself a chapter; instead, I went sideways and purchased arguably one of GW's best specialist games ever: Space Hulk. Thank goodness it has only a few minis, but I wanted them protected, so I purchased the Battlefoam tray.

The terminators in the box are Blood Angels, but in my day, I remember the Deathwing Dark Angels, and that's what I wanted, so I picked up the dataslate which has rules for the Dark Angels. Then I went to eBay and bought a squad (+1) of Dark Angels. (The +1 has a plasma cannon which is detailed in the dataslate.)

So here I sit, one week later, $180 spent, and with a 25-year 40K hiatus broken because Andy let me paint a couple beaky space marines. But I'm pretty sure it'll stop there. I have other things to do, so not much extra time or space for more 40K. And if it does go bigger, with say a chapter of space marines, I will name them, in cursing Andy, The 1,000 Dammits. Their color will be Angry Yellow (Bryon and Andy will know what I mean by that.)

(By the way, I am remaining disciplined and have finished quite a bit of work on the Rogue Planet 54mm figures. Still a bit of green stuff work to do, but they're almost ready to be primed. I'll try to get a photo of the pre-primed converted figures later.)
Email ThisBlogThis!Share to TwitterShare to FacebookShare to Pinterest