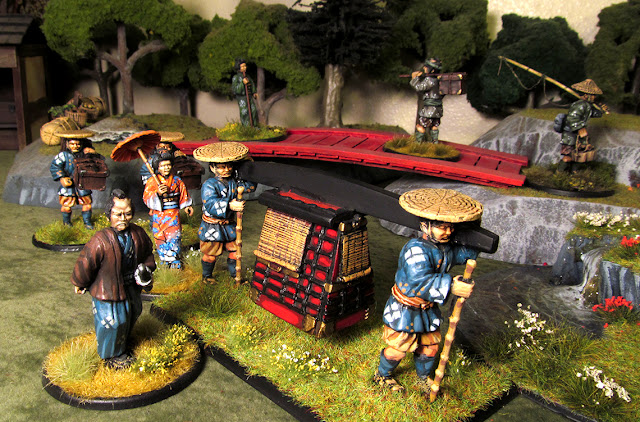 I've had these 40mm figures from Steve Barber's samurai range for months and only now finally finished them. There was a lot of planning with these, to get the individual figures assembled and prepared/fitted/aligned to carry the kago/palanquin, to get the kago/palanquin itself assembled and painted (I assembled it incorrectly, by the way; it should have a peaked roof,) and then of course to get a scheme planned and everything painted. And all of this occurred during a time in my life when painting minis was the last thing on my mind. 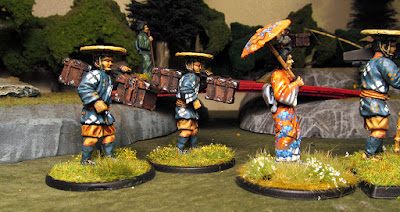 Fast forward a few months, and I'm currently experiencing a resurgence of minis painting. I saw these guys sitting off to the side and pulled them back to the table. Now, my entire samurai collection is once more complete.

I would like to assemble and paint one more kago, but before I do, I might commission a sculpt of a noble to sit inside -- the opposite side has an open window which was planned for the future commission. It still might be a while until I commission another sculpt, but the rider is a strong contender to be the next. I think in the coming months/years, my next commissions will be various Edo period civilians -- pilgrims, laborers, messengers, travelers, merchants,etc. Don't forget, you, too, can commission sculpts!
Email ThisBlogThis!Share to TwitterShare to FacebookShare to Pinterest