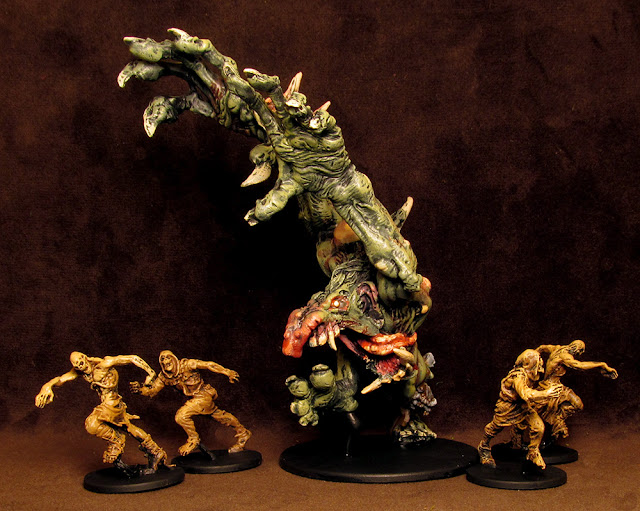 I finished my first (of the second wave of) Zombicide Black Plague. Here are some deadeye walkers and a troll. I also finished the extras of my walkers and runners, but you've already seen those.

I chose gray for the deadeyes, though I will keep to the sepia-esque shade for the normal zombies.

I decided to go full color with the troll since it's easy to differentiate the abominations with the survivors -- especially this troll!

It took me about an hour and a half to complete the deadeyes, a dozen or so normal zombies (including fatties, runners and a normal abomination.) I'm getting better at speed-painting in monochrome. Zombie-wise, i have 40 or 50 NPC zombies to go. I should be able to finish those in a sitting or two.

I'll probably be selling some (unpainted) zombicide stuff, including all of my wolves (as well as the two wolfbominations and the abomin-Alpha,) as well as a my Ultimate Survivors #2 from modern Zombicide -- so if you know anyone (in the U.S.) who's interested, I sell for reasonable prices :)