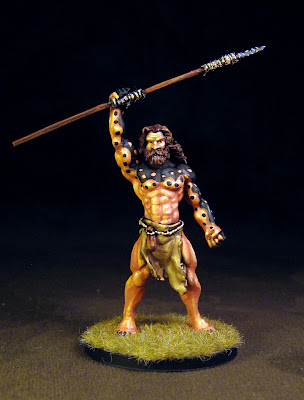 Here is my "First" hunter. He's not first in the order I painted him, but rather he is the most senior/adept/skilled warrior of the tribe.

I think I've settled on a reasoning for the warpaint: All the spiritual characters -- shaman, fire maker -- as well as all the hunters will wear paint; all of those characters needing the most help from the spirit world. This leaves a few scouts and the chief without paint. It will be a good mix.
The spotted design in the paint represents the spots of blood leaked from the moon during the creation of the Waiteri (mentioned here.)

And , whaddya know, it's already been a month since I ordered these figures! This past week or so, I thought I was moving too fast with these figures. I guess I've only finished five and have seven or eight to go (as well as a couple small camp dogs which I would like replace with larger hunting dogs.) This also doesn't include the four or five figures I plan on ordering soon.

Bringing me to a quick question: Does anyone have a suggestion for a prehistoric tribal character they'd like to see added to this tribe using one of Bronze Age Miniature's generic figures as the base? Let me know! I'll probably be putting in a small order toward the end of this week.

This has turned into one of my more enjoyable summer projects. I probably won't be doing too many 28mm figures except for those done for my friends and me for D&D. I'm sure there will also be the random figure that just happens to catch my fancy. But I want to cut my teeth more with the sculpting on some of the 54s.
Email ThisBlogThis!Share to TwitterShare to FacebookShare to Pinterest