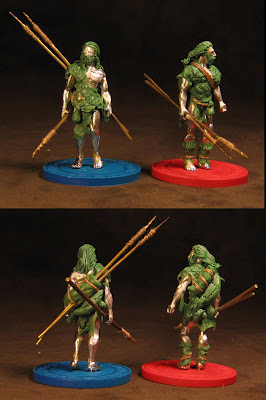 I was thinking about how I would present the tribe while it is in progress. I would like to share each little step, but there would be too many pics and posts covering every little thing I added with greenstuff (such as a new moustache!)So I've settled on posting pics of figures whose conversion work is finished, and who are simply awaiting primer.

After the shaman and the first caveman, here are my next two ready for the paint. I call them my scouts and I've outfitted them as such. They have carrying bags, bedrolls, extra equipment, and one even has a dead bird hanging from the back of his belt for lunch (difficult to see in these pics, though.)

I've made some good progress in the past few days. Most of the major work is done, I'm just adding small things such as belts, pouches, bags, leggings etc (The prehistoric equivalents, that is). If I didn't have a busy work week coming up, I think I'd have all the conversion work finished this week. Maybe next weekend I can get everything finished with one last push.

In the meantime, I'm looking through Bronze Age's generics to see what else I could use or how I could convert copies of figures I already have. The mammoth is still only on paper; I want to find some good armature wire (I've never built an armature), before I begin.

On a side note, Blogger unveiled some new layout/design elements, so I had a little fun. Not sure I like my newish look, but I don't hate it. I still would like my list of links along the right rail to be condensed somehow (perhaps as titles with dropdown tabs.) Oh well, I'll figure out something, but I'm a painter first.
Email ThisBlogThis!Share to TwitterShare to FacebookShare to Pinterest