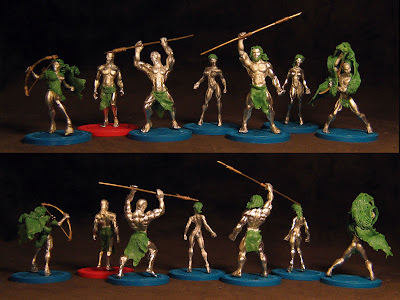 Work has been progressing slowly but surely. Here's the work I've done so far; not a lot, but the shaman and archer were my most difficult figures and took most of the time.

Some figures will be only in loin cloths, some will have more furs. Some, maybe nothing at all. I don't expect to have any wearing as many hides as my first caveman (the one converted from the germanic captive). For equipment straps, legging wraps and belts, I think I'll use actual twine (roughly "braided" ((read: twisted)) into rope.) I have been making indentations into the loin cloths to more readily accept these twine wraps. I'm still thinking about how to go about doing the leggings. I've got a couple ideas I'll play with.

I think I have the hair figured out; it's not too difficult. The beards and moustaches are a a little iffy: If you do facial hair, use about as half as much greens stuff as you think you'll need. Then cut that amount in half again.

The only other item I think will be difficult will be necklaces. Something with a strap and a "medallion" of stone or wood won't be too difficult; it's those necklaces with lots of teeth or bone. I'll figure something out.

Last thing: I told myself I'd paint these only after all the conversion work was done. I think I may paint one or two, something to help drive me to finish the rest. The shaman and the loner (that's what I call the figure converted from the germanic captive) are finished and just need to be primed. I think I'll at least get them primed this weekend.
Email ThisBlogThis!Share to TwitterShare to FacebookShare to Pinterest