Here are the ladies from Copplestone's Gangster's pack GN11 Swell Dolls. I wasn't sure which colors to go with right away, but I settled on some muted tones. For example, instead of a bright green or blue, I chose Foundry's storm blue and storm green (both colors I used heavily on my tramp steamer crew.) I wanted these ladies to look like they could belong in the Roaring 20s as well as the first years of the Great Depression. 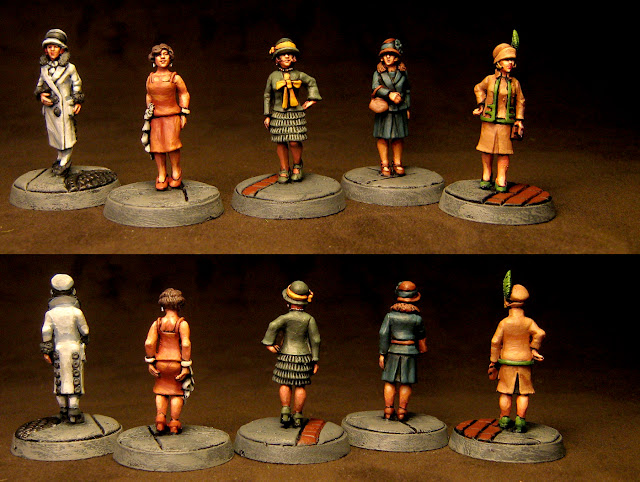 In the meantime, I went ahead and painted up the rest of the bases on my civilians (the fellas.) I also have a few more packs ordered from Copplestone: O'Hare Boys, Candy Street Punks and Frankie's Fingermen. Sure, the tommy gunners pack adds some nice firepower, but I'm already out of space in my new Chessex box (I'm putting terrain in it, too.) I'll get a start on the men later this week. I also need to get the greenstuff out again and sculpt some more concrete bases.
Also in the gangsters genre, I just finished reading Hammett's "Red Harvest," starring the Continental Op. That was some great fun. A little bit of private investigator action, and a little bit of Yojimbo.
It also figured in my deciding not to purchase the tommy gunners: most of the battles were all pistol play. Well, there was one battle with tommy guns, though it was less battle and more massacre.
Email ThisBlogThis!Share to TwitterShare to FacebookShare to Pinterest