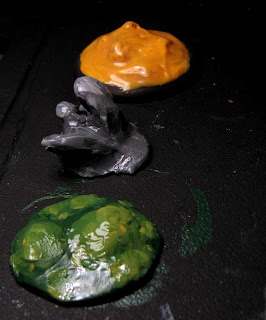 No D&D game would be complete without an ochre jelly, gray ooze and green slime. These were easy to make. I used a bit of Sculpey to bulk out the "body" of each slime. For the ochre jelly, I mixed a little (JUST a little) bit of ochre paint to some epoxy resin and poured it over the (baked/cured) Sculpey base, then glued it on a display base ... well, it essentially glued itself to the base.
The gray ooze was my attempt to sculpt a slime in movement. Meh. Not the best, but it gets the job done. It's shiny here because the paint isn't dry. I could varnish it, and the effect would be adequate, but I want this sucker to shine, so once it is dry, I will coat the ooze with a layer of clear epoxy resin. The same goes for the green slime. Later I'll find proper bases for them.
And I think I'm short one -yep - I need a black pudding. I think Dr. Egon Spengler would be proud of this humble collection.
Email ThisBlogThis!Share to TwitterShare to FacebookShare to Pinterest