While playing with the dragon, I found time to finish up my brown orcs. The large orc with the 2-handed sword is Reaper No. 2335 "Black Orc Warrior," while the other three came in a pack- Reaper No. 3502 "Classics: Orcs." The classic orcs are available individually on Reaper's site. I've mentioned before, but I'll repeat, I like these orcs because even though they're a more modern sculpt, they still have some old-school styling. That's what I like about this current project: Even though, I'm looking for more modern sculpts, I'm painting up these figures based on 1st edition D&D descriptions (Monster Manuals, Deities and Demigods, etc.) 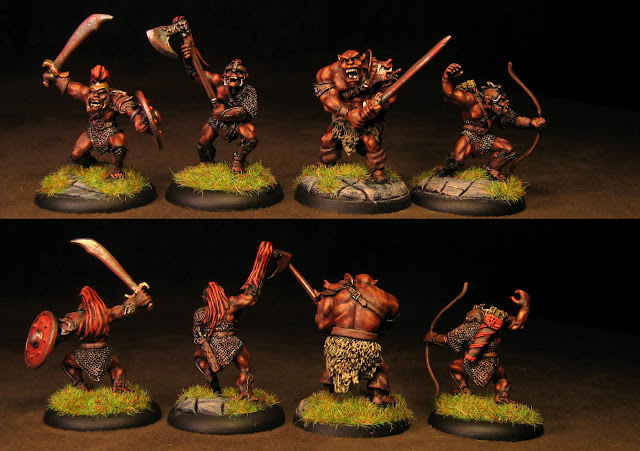 I did a couple minor conversions; I replaced the orc archer's bow with a piece of shaped brass wire; I'm always paranoid about bows (and other thin weapons) bending/breaking with as much handling as they take, so I almost always take steps to strengthen them. On the second orc from the left, I replaced the axehead with a bearded axe (my preferred style of axe.) The pinning on the axe wasn't my best, so I strengthened it with a little bit of greenstuff in the guise of weapon plumage; I used the leftover greenstuff from the axe to make the plumage on the helmet of the4 first orc on the left.

Next up are a troll, cyclops and minotaur. I'll also order some hobgoblins and bugbears for later.

I may have another go at a few repaints of some of Jeff's D&D plastic minis after having success with the dragon; I could probably start with the beholder sitting on my table right now.