Another samurai, and notes on Reaper Bones

Here's another of Steve Barber's samurai. This is actually one of the first 42mm figures I purchased a few years ago. I decided it was time for an update, since my skills had improved. 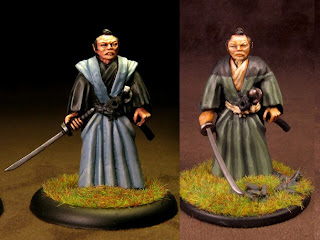 The first thing I did was to give this retainer a much more respectable blade. The other was too short (it could have been his wakizashi, but that's not the hilt I clipped away from his scabbard originally.)

I also changed the angle of his grasp. The original pose of holding the sword straight out to his side was because that was the way the hand was sculpted (holding a fan). The back of the hand was somewhat attached to his sleeve, so I couldn't do a simple cut and rotate. So I cut away the old hand and sculpted a new one. I chose to have the blade out front and down because this kept is close in to the figure (so that it won't bump into other figures during play.)

And yes, I stole the kimono color design from the Okko comic.

I got a start on Jeff's Bones figures. Here are a few quick tips:

You can indeed paint straight onto the figures without a primer coat, but I find the paint chips off much too easily without some kind of buffer (primer.)

Don't use Testors Flat Black to prime these figures (I use Flat Black to prime everything else); the figures will remain tacky for months and months. Instead, I use Delta Ceramcoat Black, brushed on, to act as my primer. My biggest worry is that the paint will easily chip off the porous surface of the Bones plastic, but I'm finding the Ceramcoat has some good grab. It also seems to be a good surface to paint on. Another nice thing with craft paints is that after they dry, they retain a little bit of flexibility, which is nice for these bendy figures.

The paint is still going to chip (I might try a brush on varnish,) but even all the metal figures I've given to Jeff have plenty of chips and wear on them, from years of D&D play. So I've resigned not to worry too much about the "chipping" factor.

Don't forget to wash the figures in soap and water, allowing them to fully dry. I didn't do this a few months ago with a couple test Bones figures  I had, and it didn't seem to make a difference back then. But I noticed the Ceramcoat layer "gripping" the surface a little bit better with this latest batch that was washed.

That's all I have for now. I'll try to offer up some tips as I paint the Bones figures.
Email ThisBlogThis!Share to TwitterShare to FacebookShare to Pinterest