Until I can sell off some of my minis collection, I'm trying not to acquire too much more that I can't easily store. Luckily, the samurai will fit into Chessex cases. But buildings are difficult to store away, so unless I can put them on semi-permanent display in my apartment, I try not to build any new ones. 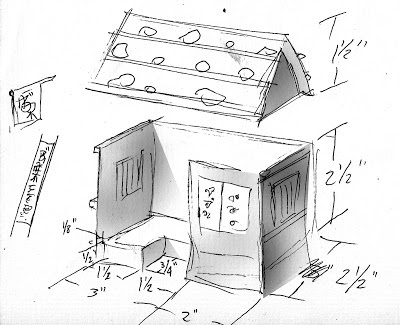 But smaller buildings don't pose too much of a problem, so I think I might try to build a small Japanese tea shop, something a road-weary traveler can stop at for a few minutes to drink some tea and eat a couple rice balls.

I'll build it with a removeable roof for a couple reasons: First, of course, so I can have my samurai fight in the interior (though, there will only be space for a couple figures in the small shop), and second, I think I can build the shop small enough to also fit into a Chessex case.

Some of you might remember my Street Corner collection. I put that collection together (including all the small buildings and accessories) so that it would all fit into one Chessex case. The samurai already will two or three cases. My next case will have space reserved for the tea shop and all my little trade good accessories.

Another reason for choosing a tea shop is that I want scenery and details that a samurai, ronin or bandit might fight along the great road (the Tokaido.) There won't be any castles or towns for my samurai anytime soon (for the reasons I mentioned above), but there'll be plenty of adventures on the road.

Now, this is all still in the planning phases, so you won't see a tea shop for a little while. I still need to work out a bunch of details, such as how to sculpt some small goods such as sake jars and rice balls. I need to do some more proper measurements to determine how much wood I'll need to build the shop. I also need to work out some proper hiragana signage, and I need to figure out what the interior should look like. I'm also working on repainting yet another one of my samurai. So, yes, lots of work. Did I mention my friend Jeff's Reaper Bones figures have arrived? Oi vay.
Email ThisBlogThis!Share to TwitterShare to FacebookShare to Pinterest