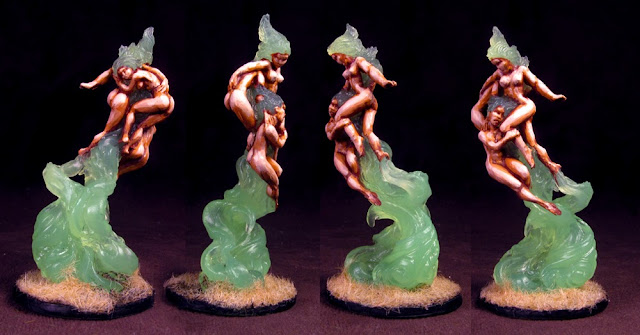 This is the translucent Bones version of Reaper's "Ghostly Summons" (3395) figure. I didn't originally intend on painting it, but it just seemed naked without any paint.

This one was a little difficult: The facial features were tiny and hard to find on the translucent plastic; there were a lot of limbs to look for (and I was trying to paint the women without getting any paint on the mists part of the figure); and, unlike most of the other Bones figures, there were a couple mold lines I had to carefully cut away.

But the figure is finished, and it looks nice. Not sure what Jeff will do with it, if anything; maybe he can use it to distract his players while he sets up something mean and ugly for them to fight (during D&D.)

Update: This translucent figure (as well as the metal version) is actually for sale individually now at Reaper. It is No. 77095.
Email ThisBlogThis!Share to TwitterShare to FacebookShare to Pinterest