Janadon worked the mines on Rock 1359, but liked to box for a little extra pocket change. Fights on the asteroid circuit are difficult to schedule, so opponents usually are pitted against whoever was available, regardless of weight class or skill. Underdog opponents, however, are usually allowed a stim or two to help equalize the match.

Janadon was the underdog of today's fight, having been matched up against the creepish Kazz-AH of the Elder Planet. So Janadon took his favorite Stim in the dressing room, Robert's Rebound #7, which would add some resilience to Janadon's body.

The klaxon signaled the beginning of the round. The two fighters came together, hands and tentacles up. Kazz-AH flowed to one side looking for an opening, but Janadon came straight at the alien ready to lock fists right away. 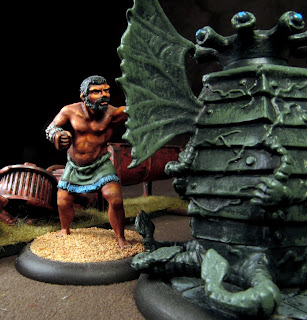 The two traded a couple test blows, but Kazz-AH quickly forced Janadon into the ropes. Janadon had a deep-seeded fear of all beings of the Elder Planet, but had manage to overcome most of his childhood phobia. Still, that fear would resurface every once in a while, and Janadon carried it into this fight.

He found enough in himself to get off the ropes, but Kazz-AH landed a solid blow across Janadon's face, dropping the man to the ground and swelling his right eye shut.

Janadon rose up, but was in a bad way. Almost senseless, he couldn't muster his boxing skill to help him, and was relying on nothing but pure aggression to get him back into the fight. But it was enough -- just enough to allow Janadon a few moments to regain his senses. 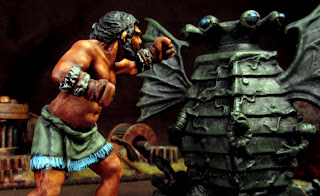 Despite Janadon's newly found mental reserves, Kazz-AH was unfazed. And again it pushed Janadon into the ropes, but the man quickly clinched, just long enough for the round to come to an end.

The man walked to his corner. He turned and looked straight into the eye stalks of Kazz-AH and smiled. Suddenly the alien opponent was no longer a big, ugly, scary monster; it was just big and ugly.

I got a draft of these rules to try out -- well wait, what is it? It's boxing just like in Friday Night Fights, but the setting is the far-flung future of 5150, and the opponents can be human or alien. They can rely on natural ability, but more often than not will also use physical enhancements, Stims (stimulants), and Loops (embedded CPUs) to shift the balance of the fight.

And yes, there are aliens. Aliens are defined less by weird physical traits, and more by the available attributes packaged to define specific races. I created Kazz-AH as an original alien, but the major races from 5150 are represented (Hishen, Grath, Razor, Xeog and Zhuh-Zhuhs.)

There are also, of course, rules allowing you to box with your human characters from 5150.
Email ThisBlogThis!Share to TwitterShare to FacebookShare to Pinterest