This was a fun little group to put together. The tan and blue combo came out great. The converted-to-carry-a-lance samurai turned out much better than I had hoped. The long haori vest turned out nice (I was worried about how it looked sculpted, but the paint helped it a lot.) And the bases came together nicely with a lot of unifying elements (as if these figures needed anything more to imply they were of the same group.) 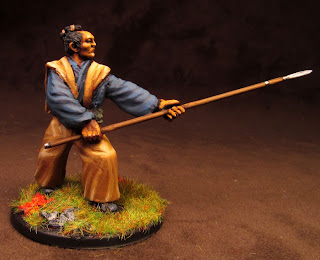 I purposely did this group in similar colors so that they can represent either retainers of the same clan, maybe the core group of a weapons school or a low-level official and a couple of his guards.

I've only been doing two things this week: Working and painting. The painting has really been enjoyable and has been a nice diversion from the usual work ugliness. And all that painting has yielded three samurai already (and the other three figures with a good start.)

A question I usually get is what flesh recipe I use. Since I got some new paints, I was able to create a new recipe which I like very much for Japanese/Asian skin. 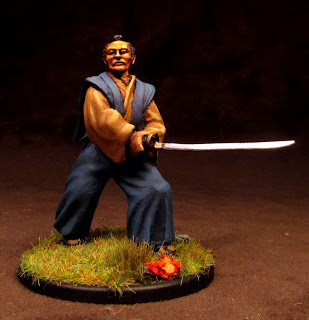 *Pro Paint Chestnut Brown, not Master Series. I believe Reaper ported all their old colors from Pro to the Master Series, but I can't speak to the quality of Chestnut in the Master Series. The jar I have is almost 7 years old, and is gunky with just a few puddles of useful paint left- but just enough to at least get this batch and maybe one more batch of figures fleshed out. And for being that old, the paint has otherwise held together well- it's a touch thick, but it covers well even with a touch of water added. I miss the Pro Paints.

For a caucasian flesh, I'll use something different than Chestnut as a base. I prefer something a little more rosy and less brown, much like Foundry's Flesh 5A.