Bryon paints his first minis, and I paint some pirates 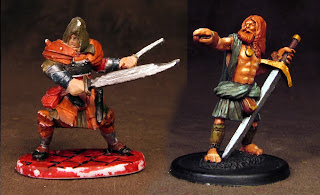 My friend Bryon got his first taste of painting at Gen Con. His first effort was the Bones figure at left. He came over to my place this evening, and I gave him just a couple words of advice, let him at my Foundry paints, and he produced this Reaper Highlander figure- a great job for only his second figure ever.

He's got the basic concepts down (overbrushing, washing, layering), now all he needs to do is paint some more figures to gain practice and speed. Good job, Bryon!

While Bryon was painting that highlander, I dug some of my old Foundry pirates out of the lead mountain. I started this hobby with Games Workshop, but once I finally broke free, my first figures were Foundry's pirates. And these were a treat to paint!

I think I'll see how many I can paint before I tire of them- I hope to paint 14 of them (specifically 14, so that they'll fit into a small Chessex case.) Then I'll probably sell the small landing party (which will include a ship's gun and two-man crew, among other figures.)
Email ThisBlogThis!Share to TwitterShare to FacebookShare to Pinterest