Here are the core members of my little sword school group. Well, it's sort of a sword school- the lancer in there must be a double-major. 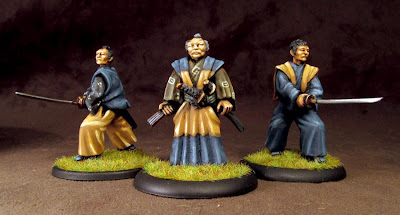 Three of these samurai were repaints. I dropped them into the Simple Green overnight. After getting the paint stripped, I added another vest (called a jinbaori, I think) to one samurai, and some forelocks to the head of another samurai (to indicate either his youth or perhaps that he's a ronin with money enough for school.)

That's it for the samurai for the time being. I'm not sure what I'll be doing next. I'm not finished with the samurai, though.

I plan on commissioning Steve Barber to sculpt at least one new samurai (unarmored samurai/priest archer, kneeling in a high-draw position.) I hope to commission him also to do a swordsman with separate arms that can be posed in a few optional ways. But all that will come later.

I have a few ideas for other sculpts to commission as well, but I need to sell some minis first to fund the work and to make space in the apartment.
Email ThisBlogThis!Share to TwitterShare to FacebookShare to Pinterest