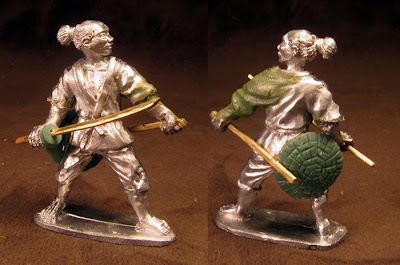 Here is yet another conversion of one of Steve Barber's samurai peasants. He holds a katana in one hand and the scabbard in his other hand, both items from hammered brass. I cut the arms off where they meet the tunic sleeves, so that I could rotate them to accommodate the slight change in position.

I originally tried to saw off the scabbard arm at the shoulder, but my saw wasn't going to have any of that. So I added green stuff over the damage and resculpted some folds. I also used the green stuff as an opportunity to further strengthen the scabbard arm's connection to the sleeve.

I had the extra hat sitting around, so I slung that from his belt. The hat provided yet another "glue" point for both the scabbard and the back of the sword arm.

I like the look of this pose; this is a dynamic figure I can think of more than one use for: Upstart peasant who thinks he can roll with the big boys, a young bandit, or maybe even a novice swordsman/ronin (who evidently spent all his money on a sword rather than decent clothes.) I still have a chance to file away some of the bottom of the tunic and sculpt it as a short kimono; I'll see how I feel about that later. I still have a bunch of samurai waiting for conversion.
Email ThisBlogThis!Share to TwitterShare to FacebookShare to Pinterest