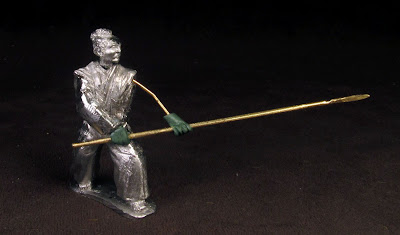 This has been one of the most difficult of the samurai conversions. Mostly, the difficulty was in removing the figure's left arm (without a Dremel tool.)

I had originally intended to remove both arms (hence the damage to the right arm), which are integral to the body, but after all the effort it took to saw, cut and file away the left arm, I decided to just utilize the original right arm.

So I'll have to use some green stuff to repair/resculpt some folds onto the right arm. I also still need to sculpt a new left arm and thumb (as per the original plan.)

With the exception of having to hack away a bunch of thick metal, this conversion is going along smoothly and (somewhat) as planned. I'm hoping the sleeve comes out at least passable. If it doesn't, I'll just have to keep practicing; this figure isn't going anywhere.

I have a few other samurai yet to work on, though, their conversions will go much smoother. (I'm simply doing kimonos and maybe a haori or two, all of which I've done before.) I'm looking at my collection right now, and it might be getting a little too big. Maybe I'll sell some. Maybe.
Email ThisBlogThis!Share to TwitterShare to FacebookShare to Pinterest