I finally got the finishing touches on a couple of these figures, and have finished all of the survivors from the Zombicide: Rue Morgue box. The four figures to the right  (and one in the back-center) are part of my "Gypsy" tribe (from the movie "Bounty Killer.") I plan to add one or two more members to the tribe.

Next on the table will be the skinner zombies. I painted up a few prototypes; I'll have to check my notes again to remember what colors I used. It's important to keep a painting journal, especially if you have to repair chipped paint, for example, a few years down the road, and you've forgotten what colors you used.
For the skinners, I may post a progress report, but more likely, I'll just post the whole bunch when they're all done. 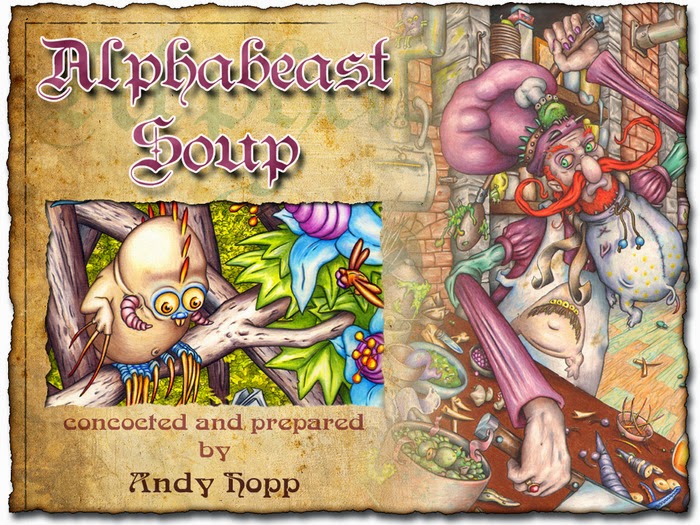 Hey, remember Alphabeast Soup? No? If you haven't already, check it out on Kickstarter! It's an alphabet book, but by artist and Lowlife RPG creator Andy Hopp.
Yeah, I'm pimpin' it pretty hard, but it's a project that Andy has been working on for a while, and I think it'd be nice to see it come to fruition.


Space Cadets: Away Missions has had a few issues with jumpy backers dropping out because they're not getting enough free stuff, but I urge you to take a look; they've revamped in a BIG way. The 5th and 6th figure stretch goals have been lowered a lot, and a painted-minis pledge level has been added (factory painted and only the rocketeer figures, but only $20 more for the pledge.)
Check it out. You like? Then help it out!
Email ThisBlogThis!Share to TwitterShare to FacebookShare to Pinterest