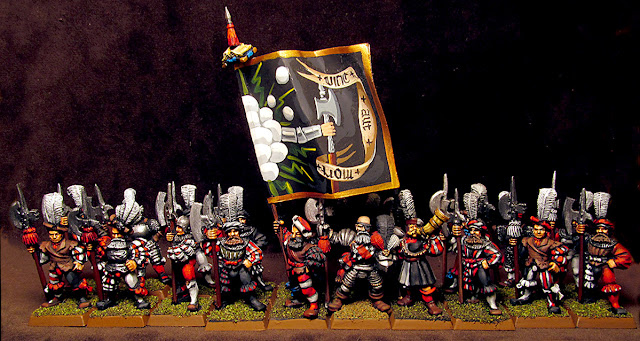 I finished up the back two ranks of my halberd block. Nothing much new to show specifically from that work, but here's the full regiment.

Pretty soon, I'm going to need to make new movement trays, but I'm not sure if I want to go with 5x4 blocks for play, or 2x10 lines for display. I'll probably do the lines since my army will be displayed more than played. Though, I do like a deeper looking block of infantry -- maybe I can add one more figure and do 3 ranks of 7.

Next up are the other block of halberds. Most of the 2nd were already repainted but in a different scheme a couple years back. Not my best work, but it's far superior to the original work. I plan on only painting over a few items (cuffs and pants) to bring the scheme in line with my red, white and black palette. Luckily, I have some stripped, unpainted and primed figures enough to serve as the front rank for this regiment, so I can hide the overpainted ones in the back :)

Yeah, I'm just too damn lazy to strip and repaint yet more figures (several are already in the drink as I type) ... or I could be even more lazy and just have the one block of halberds, so I can get to painting some Foot Reiksguard or something. Hmm, I have a cannon and crew that's ready to go, too.
Email ThisBlogThis!Share to TwitterShare to FacebookShare to Pinterest