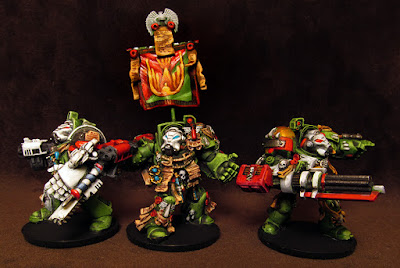 All of my troopers are finished as are these three from my HQ squad.
We have here, from left, an apothecary (converted), a standard bearer (with custom-made greens tuff banner), and a champion with an assault cannon (a basic arm-swapped figure from the Space Hulk box.)

All I have left to paint for Satys's Orphans are the librarian and a chaplain (who will lead my force.)

My Chaplain (named Steuben) has been requested to lead the young Orphan's company in place of a captain since the unit lacks any experienced (though they are competent) leadership. Chaplain Steuben is a hard leader who brings one of the most difficult training regimens along with a heavy dose of discipline. His methods are tough but not draconian; the horrors of the hulk will punish soon enough those who do not take to Steuben's lessons.

And yes, Steueben is named after the Prussian officer (Wilhelm von Steuben) of the American Revolution who whipped (probably literally) Washington's men into shape at Valley Forge.
Email ThisBlogThis!Share to TwitterShare to FacebookShare to Pinterest