Just a quick post to show the current progress of my Space Hulk company/Space Marine Chapter-- yeah, about that; I don't think I'll ever actually buy enough figures to field an army of my chapter, so I think I will go the company route and use my terminators as an ad hoc force -- still called Satys's orphans, with all the same lore and origins, just with a smaller force; I had only ever intended on using them with Space Hulk in any case. 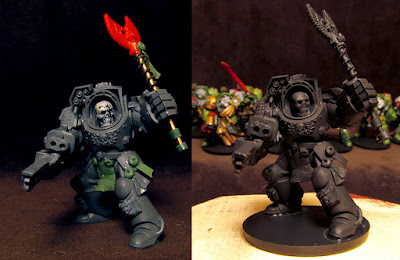 Anyway, back to the figures. Tonight, I finished the last of the heavies. I have a pair of assault cannons, a plasma cannon and a flamer. I might add another flamer later (I still have a large squad's worth of other termies in my original copy of Space Hulk.)

The assault cannon carrier to the far right is a minor conversion, using an arm swap. Instead of the regular pose in which he's just spraying and praying, this one has the terminator pointing at his targets -- "calling his shots," as I tell my friends.

I also finished assembling my chaplain conversion. To make space for his crozius, I lopped off the chainfist and moved it over to the bolter for a combi-weapon (is that how that works? Yeah, I'm still a noob -- sort of.)
I like this pose; to me, it looks like he's waving his comrades toward battle saying, "Penance is this way, you sonsofbitches!"

As for non-chapter specific figures, I'm missing only a terminator with a Cyclone missile launcher, and an apothecary. The apothecary, I hope to remedy soon. I just need the right bits. I might even be able to make my own. With an apothecary, I'll have plenty of characters to form a pretty good command squad: Librarian, Captain, Apothecary, Chaplain, Standard Bearer, and Champion. I'll nominate one of my extra heavies as the champion why not :)