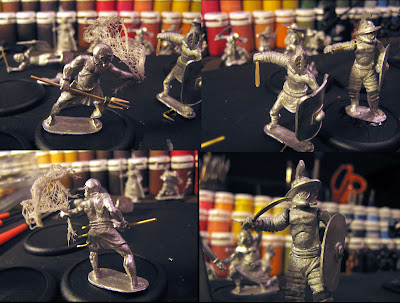 It has taken a lot of work, and a lot of work remains, but the new gladiators are at least assembled. There is a lot of greenstuff work that needs to be done.
My secutor/murmillo didn't turn out as good as I had hoped though, I'm not totally displeased; the thraex turned out about as good as I had hoped (and the arm swap was succesful); and the retiarius turned out much better than I anticipated!

Yes, that net is suspended in mid-air. I don't know how long it will hold itself suspended like that, but that's how I'm going to model it. And should it ever sag to the ground, no problem; that was my original plan. I'm thinking (if I have any), a piece of thin brass rod could be snaked through the net to provided more permanent support, though I'd have to prime and paint the net, and I'm not sure what the primer and paint will do (weight the net down? soak it into a different shape? Dissolve it?) I guess it's more of, "I have this net where I want it, and I don't want to mess around with I any more than I have to."

By the way, the retiarius uses the same base gladiator model as my dimachaerus.

I have a few other non-gladiator figures I need to assemble before I prime the whole lot. Then it's off to painting gladiators! (And a Civil War figure or two.)
Email ThisBlogThis!Share to TwitterShare to FacebookShare to Pinterest