They're coming along slowly, mostly because I'm doing all of them at once, but the Blood Bowl ork team (the plastics that come in the box set) have been fun to paint.

Since they're plastic, and will end up being a "house team," I'm painting these up very loosely. There are no in-between mixes of paints, just straight jumps to the next color up. I'm not paying close attention to where the paint needs to go; Sure, I'm being careful to keep the colors in their respective areas - I'm just not being picky, for example, about getting every muscle perfectly highlighted.
Since I flocked one (the finished lineman illustrated to the left of the main pic), I guess I'll flock the rest.

I won't finish before the new gladiators arrive, and I'll probably not get back to these orks for a little while, but at least they've helped keep my brush moving. I also have some other metal figs on the table that need assembling/converting, but I'm waiting for the gladiators; this week/weekend will be dedicated to assembling and priming the numerous new figures.

New old figure on its way! 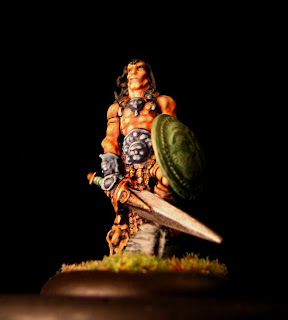 I also have a new Drac Mac Syro on the way! I'll paint up the new one without a shield. I'm still not sure how I'll paint him. I certainly want to do something different from the first one. I'm also thinking about adding a cape, but I'm not sure I want to hide those awesome back muscles; I may just keep this figure vanilla.

Perhaps his accessories will be all-metal and his hair gray, the same warrior as I've originally painted, but much further along in his years, and a little wealthier from conquest.

I had also been thinking about adding tattoos, but I'll save that fun for a couple of my new gladiators (I plan on going Celt-wild with them. Should be fun!)
Email ThisBlogThis!Share to TwitterShare to FacebookShare to Pinterest