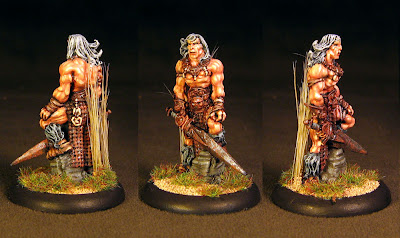 Here's my second copy of Drac Mac Syro (from Rackham's Confrontation.) I felt like painting him before going on to the next gladiator, and threw him together in a couple hours (though, I should probably have spent more time on him considering how much I paid for him ((it wasn't extravagant, but it wasn't cheap.)) But he came out as good as I think I could have painted him.

The theme I wanted to go for was that of an old warrior, his face wrinkled and battered by exposure, his armor and blade all rusted and his hair white; this is a warrior who is left only with experience and will. Gone are the days of charging headlong into battle; this barbarian walks into his fights. He's in no rush-- his poor quality equipment is proof that he is a warrior beyond his weapons, a fighter who's true weapons are wisdom and will -- at this point in his life, he knows he can beat every opponent he faces. Even when he confronts Death, this proud warrior will walk into the fight with confidence in victory.

I have a lot of barbarian figures, and I think this is one of my favorites, mostly because I enjoyed creating a figure around a theme.
Email ThisBlogThis!Share to TwitterShare to FacebookShare to Pinterest