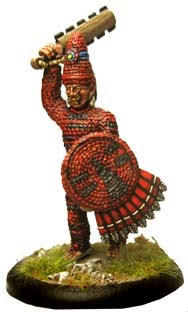 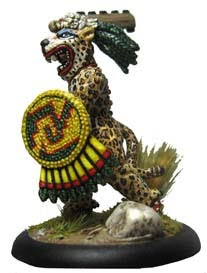 Steve Barber has released his new 42mm Aztec range. I am impressed! I like'em. I won't be purchasing any soon since I've already launched into samurai (and now Gladiators), but if you're looking to get into large-scale figures, I would recommend these. The large scale is easier and more relaxing to paint, and the subject matter will let you pull out some of those unused colors in your palette. And, honestly, you don't need a lot of these for a good skirmish game.

Some of you are thinking, "I can't get into a large scale range. I just don't have the space, or I don't want to get into a new range."
Most large-scale ranges have subject matter that can be played in skirmish games. If you're not interested in getting into a new game, I would still suggest you purchase one or two large scale figures just to paint up. I really do believe painting something larger will help you loosen your brush technique and relax your eyes. And I've found it easier than expected to switch between 54mm, 42mm, 40,, and 28 to 35mm sizes. (Hmm, maybe THAT could be a competition prize on my blog ((see earlier post)); a large scale figure ((or selection of different large scale figures.))

So I'll leave the Aztecs alone for a while, but I will probably partake, later, in a couple of the new figures in Steve's samurai range. But first thing's first; I need to finish the gladiators on my table. Just a few to go (and the next one is also getting the woad tattoo treatment- it's actually easy to do, give it a try!)


Want some Aztecs? Go here! They're in Steve's 42mm ranges. Steve tales Paypal, just e-mail him; he's a nice fellow and is easy to communicate with. He's in the UK but he ships internationally. Don't forget to check out his 42mm samurai and musketeers.

Want to try something a little larger (45 to 54mm), but not sure what you'd like to try? Send an e-mail to Harold over at Blackcat Miniatures. He has plenty of ranges to whet the appetite, and his prices are great for what you get. Harold is in the U.S., but I believe he also ships internationally. This is where I get my gladiators.

(And nope, I'm not getting anything from these guys for recommending them; they've always given me great service and excellent figures, so I'm just returning the karma.)

(Note: I copied the photos from Steve's website; these are not mine.)
Email ThisBlogThis!Share to TwitterShare to FacebookShare to Pinterest