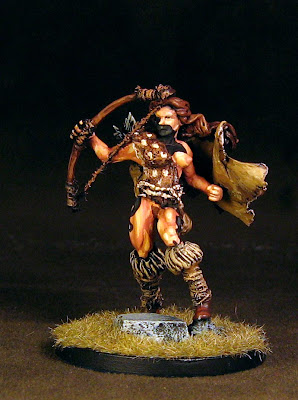 This figure is the second figure in the tribe I converted, and I think it shows: I think there's just a little bit too much going on with her. She feels a bit cluttered. I was in that mode of "let's see what else I can do," and I may have added too much stuff (maybe the cape is too much? No, I think it's the spots on the hide; I could still paint over those. Nothing is varnished yet.) But I made her, painted her, and she still fits with the tribe, so I'll call her a success.

In the meantime, I've done a lot of painting on the fire maker. I may have him finished by the end of the weekend. All that's left now is the chief ... and three more figures in the mail on their way here.

Of the next three figures, two are copies of figures I already have; I'll give them different hair and weapons to add variety. I may do not a headswap, but a head repositioning on one of the new figures. It should be easy, and the long hair will hide any bad joinery on my part. The third figure is another female. She is in a throwing motion, so I will try to make her into an atlatlist.
Email ThisBlogThis!Share to TwitterShare to FacebookShare to Pinterest