Here is a basic Waiteri man, a traveler with a bundle of sticks, a bed roll, and a spear, ready to walk to woods to the next village for trade. He wears longer leggings to protect his legs as he moves through the thick underbrush.
The copper wire works nicely for rope. It takes the paint well and shows the details of the braid easily (though not immediately evident in my meager photos.)
I've also painted a couple bits on my Conan figure: base skin coat and his base. After the figure is painted, I'll finish off the base with a tiny bit of vegetation growing through the cracks (even though this version of Conan is high in a tower; I'll take a bit of license with these figures.) I'd like to do more Conan characters, but I'll wait a bit. I still have a mammoth that needs sculpting. I'll need to keep focus if I want it to turn out nice. 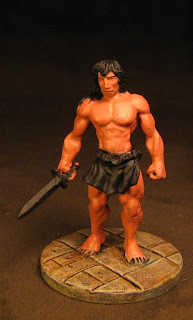 As for a Conan story to sculpt figures for, I think I may eventually do Beyond the Black River. I'll need to make a new Conan, a Balthus and his dog, Slasher; I'll add a couple of the experienced woodsmen, then a few Picts to oppose the group, perhaps 10-15 figures total, enough for a small skirmish game. In the meantime, my Waiteri tribe can double (closely, except for having brown hair and beards) as Picts, and I have a Conan already! In fact, I just picked up Reaper's new Warg figure to be a large dog for the tribe (and to double as Slasher later.) He's a little large and wolfish, but it's fantasy. As for his size to be Slasher, it makes perfect sense: After his master was slain, he's been living in the woods eating Picts :)
Email ThisBlogThis!Share to TwitterShare to FacebookShare to Pinterest