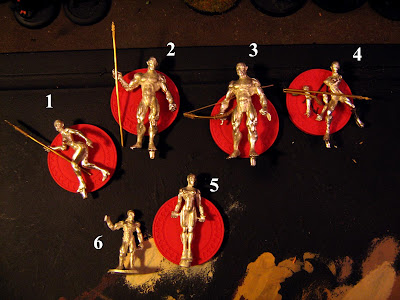 I received my second order of figures from Bronze Age. They arrived quickly as usual! (Ok, it's only my second order from Bronze Age, but the orders arrived quickly both times.)
Here are my plans for each figure. 1: A huntress either sneaking around to flank her prey, or a scout tracking through the forest. 2: This is the same figure as my firemaker. This second copy will get a full head of hair and a spear and be added to the ranks. I think I'll add him to my scouts, so he'll probably sling some supplies over his shoulder (pouch, bags, maybe a bundle of kindling strapped to a simple frame.) 3: This is the same figure as the Waiteri chief. The new figure will receive the bow that is pictured, and stand proud. I may keep his clothing simple so that I can give him some ornate warpaint. 4: Ah, finally- someone with an atlatl, my favorite prehistoric weapon. This is one of the (very) few Bronze Age figures that needs assembly. She will be in a throwing motion once assembled. 5: Oh boy! NOT a member of the tribe. This is a figure I got to challenge myself later. I pan to make her a pulp rocketeer. Not sure how the hell I'm going to pull that off; I'll figure it out later. Depending on how she turns out, I may give her away in a contest of some sort (to celebrate 100,000 blog hits which I think may come up next year sometime). If I decide to give her away, I won't paint her. Again, it all depends; if she turns out awesome, I may be selfish and keep her for myself (but I'll make another to give away:) 6: And a simple figure for my D&D collection. This is my first 32mm generic figure from Bronze Age. You'll get a better view of him later. I think I'll convert him into an inhabitant of Athas (Dark Sun). Not sire what kind of weapon to give him yet- bone or obsidian spear? Bone pole axe of some sort? I need to see a list of Dark Sun appropriate weapons.
That's it. Not as many figures as last time, but I know I will enjoy them nonetheless. I look forward to trying to sculpt some stuff for the smaller figure. The weapon won't be too difficult, but I can see some challenges with other items such as clothing- I'm not sure if I want to go primitive (since I've already done that), or do something a little more involved (pants. exciting. :)
First thing's first; I need to get stuff cleaned up a bit, then assembled and primed. May be a few days until my next post.
Email ThisBlogThis!Share to TwitterShare to FacebookShare to Pinterest