54mm Waiteri tribe: Atlatl green and that other thing

The green stuff is getting slung a lot quicker on this latest batch of Waiteri hunters. Here's my atlatlist mostly done (I need to do something with her feet- probably just some more leggings.) I think the pose works well for the atlatl. Her head isn't entirely turned toward her target, but that's ok; I'll just paint her eyes looking more toward the direction of the atlatl dart. 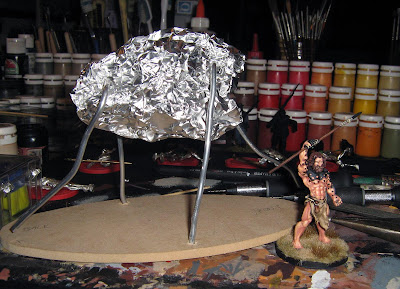 Hey, and here's something new. I have all the supplies finally for my mammoth! So I took a few minutes and threw together this basic armature. The body needs some bulking up and the front left and rear right legs need to be shortened a bit. But the height is about right.

I found the base in a bag of scrap wood at Hobby Lobby. It's 1/8" MDF. There were three more of the same piece in the bag (as well as lots of other bits- well worth the $5 I spent on it.) So if I get a hankerin', I can make some more mammoths.

Once the body is properly bulked out and the legs to where I want them, I'll wrap this core armature with some smaller armature wire (I got some 22 gauge steel wire.) As with my original dead mammoth, I'll sculpt the body first to almost completion, bake it, then sculpt the head onto the body and bake again.
Sculpey is great because you can bake and re-bake it and you're not going to hurt it. Only cooking at a higher temperature is going to harm the Sculpey (mostly by discoloring it. I have yet to investigate the structural qualities of overcooked Sculpey.)
Email ThisBlogThis!Share to TwitterShare to FacebookShare to Pinterest