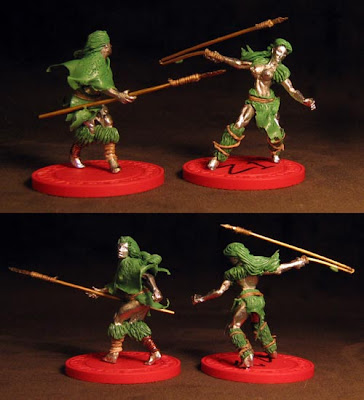 Here are the last members of the Waiteri tribe for the time being (until I figure out if I want to go on to Conan.) The one to the left can either be a scout sneaking around nearby prey, or a hunter making her last few cunning steps before springing the attack. One leg is wrapped in twine, the other in that braided copper wire I mentioned earlier. This was the first figure I tried the copper on; it was difficult, that's why I switched to the twine on the other leg. After painting, I don't think you'll be able to see much of a difference.
The other figure is my favorite action pose of all the tribe, a huntress casting a dart from her atlatl (my favorite prehistoric weapon.) The only (minor) thing I don't like is that I wasn't able to get the atatl aimed in the same direction as her face is pointed. I'll simply paint her eyes looking more toward her target- no biggy. 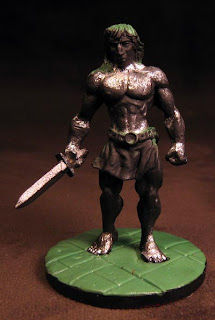 Small Conan update: I almost primed Conan before I realized, if this is the Conan who is in the tower of the elephant, he needs a proper interior floor. Easy enough, dig out some greenstuff and engrave some flagstones! I've started priming Conan here. Here's a small tip: When I prime my figures, I first lay them down with their feet toward me, then I prime the undersides of the figures. Let the primer dry, turn the figures over and repeat. THEN I glue the figures to their bases and continue regular priming. (Of course, I wait a few hours between primer coats and gluing.) This allows me to get those hard-to-reach spots, and saves time after priming when I have to fill in those missed areas. Conan is the "underside" phase in this pic.
Email ThisBlogThis!Share to TwitterShare to FacebookShare to Pinterest