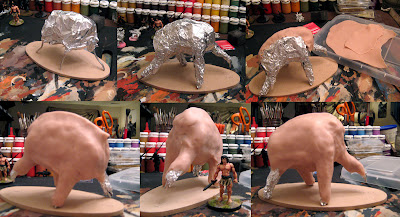 Here is my work from Day 1 of making my mammoth (Mammatus Columbi.) I chose the Columbian mammoth because scientists surmise it didn't have as much if any thick hair such as its wooly cousins; this will save me a step of sculpting :) They also had long tusks that curved and twisted in on themselves. Those long, almost-wavy tusks should look nice and imposing on the table (and I'm pretty confident with my tusk-making abilities.)
I began by building a simple armature of wire and aluminum foil. The front legs are actually one piece of wire that go through the body. The same goes for the rear legs. After I bulked up and tried to shape a little bit of the body with the foil, I dug out some Sculpey. After kneading it and rolling it into a large, flat (1/16 to 1/8" thick) sheet, I began laying pieces over the mammoth, bulking up some areas, shaping and smoothing as I went.
After almost 1/2 pound of Sculpey, I needed to stop because I was almost out of Sculpey! It's not that the mammoth needed too much, it's just that I forgot to bulk up my Sculpey supply. No worries, I only had one leg to cover up. I will sculpt and finish the body and legs, bake, then do the feet, bake, and then work on the head separately. When the head is near finished, I will fit it to the body, sculpt some neckage and bake again. Sculpey is great because you cannot overbake with it. As long as you keep the temperature below 275 degrees, the Sculpey will be just fine with multiple bakings.
When the body and head are finished, I plan on using green stuff to make the tusks, tail and ears. The Sculpey would be too brittle for any of these small protrusions. I'm still not quite sure about the trunk. I think it would be okay with Sculpey if I start with an armature.
So that's the overall basic plan. We'll see what happens, but I think I at least have a nice little start. Oh, and sorry for the grainy photos; I simply picked up the camera and snapped off shots as I went. I had a nice work groove goin' on and didn't want to break it.
I will most probably paint other figures along the way. Conan is almost finished, and I'm ready to paint a little bit of 32mm sci-fi.
Note: I will label each post as Day 1, Day 2 etc, but that doesn't mean I'll be working on the mammoth continuously. Any day I work on it, I'll try to post something. I'll try to include amount of time worked and what was added to the model.
Email ThisBlogThis!Share to TwitterShare to FacebookShare to Pinterest