Woo-hoo! I just wanted to show off a little bit: I submitted some art for the new War Rocket rulebook which was released at GenCon, and it made the back cover! Don't believe me? Purchase a copy over at Hydra and read the credits on page 2 :) 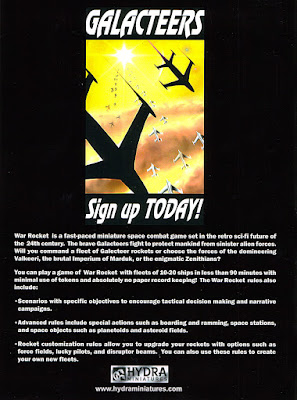 It's nice to have some published art, but War Rocket also is a fantastically fun game! (I playtested some of the earlier versions and followed the development through its later stages ((as I went off on my own tangents with other stuff.)))
I smell another project comin' up after Gamma World minis. I think that would fill my schedule through the remainder of the winter.

Ok, back to painting. I've been doing the random D&D figure between Chronoscope figures. I also have a couple 15mm Khurasan mutants on the way to try out. I'll post those much later, even if my painting turns out bad: I'll post them for posterity.
Email ThisBlogThis!Share to TwitterShare to FacebookShare to Pinterest